George Clooney on Shutdown: Anyone Who Thinks We Don’t Need Gov’t is an ‘Idiot’

George Clooney on Shutdown: Anyone Who Thinks We Don’t Need Gov’t is an ‘Idiot’ 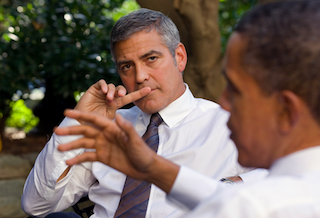 George Clooney is out and about promoting his new film Gravity, which opens in theaters today, but he had plenty to say about the state of politics in America in a new interview with New York Magazine. The outspoken liberal actor weighed in on everything from the government shutdown to Obamacare to Republicans like Sen. Ted Cruz (R-TX) and House Speaker John Boehner (R-OH).

Clooney rejected the idea of “negotiation” when it comes to a law like the Affordable Care Act. “We negotiate on all these other topics, but this was put into law, and [Obama] was reelected on it,” he said. “It was reaffirmed, it was passed through the Supreme Court — it’s a law. You don’t like it? Win an election. That’s how it works. That’s how the country works. But you don’t get to shut down the government because of it. That’s not how it works.”

He said if he “were in John Boehner’s shoes” he could understand his decision to keep the shutdown going for a short period of time, but said the “debt ceiling is something completely different.” But as for Cruz, Clooney was not impressed. “I always panic when people like Ted Cruz take the floor and read Green Eggs and Ham. You know? Like somehow they’re Jimmy Stewart.”