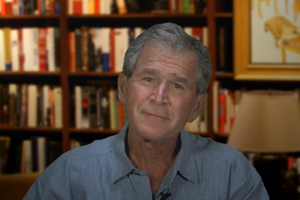 If you were one of those people that looked up at the Minnesota “Miss Me Yet?” billboard with a heart heavy with nostalgia, maybe it’s time to start checking Facebook more often– and not just for it’s premiere columnist Sarah Palin. Former President George W. Bush began what appears to be a series of Facebook “video addresses” yesterday, to keep his fans updated with the latest news on his life, including his book, his Haiti benefit project, and his love of Texas.

His “inaugural address” consisted mostly of the message that he and the former first lady are “happy, healthy, and home” in Texas, “or, as I like to call it, the Promised Land,” and, while he loved his old job, “retirement isn’t so bad, either.” After giving his upcoming memoir Decision Points a plug, he asked for audience participation on his page for new ideas to help the mission of his new association– that mission being, in the broadest terms, the spread of freedom. The video is below.

Two quick observations on this clip: First, why is it being given in the form of a presidential address? Yes, Bush was our president for eight years. But even though he stayed away from making any sort of policy or ideological comments, it’s hard to escape the fact that the aesthetics and tone of the clip were precisely that of the weekly addresses President Obama gives, in the tradition of all presidents since FDR. There’s also the fact that he even calls it an “address” and not a “video blog” or another more informal title.

Secondly, why didn’t Sarah Palin think of this? Palin is the rock star opinion columnist of the most trusted name in social networking. For the same reasons Alvin Greene won the Democratic nomination for Senate in South Carolina (“who knows?”, “the people have spoken,” or “Republican plant,” all of them work), many in the political world hang on every word that appears on her page. Wouldn’t people be even more likely to watch her page if they knew she might make a personal appearance every once in a while. One possible explanation is that taking her image to video would be a breach of her contract with Fox News, though this seems unlikely, as plenty of other Fox News pundits post video messages on their pages.

Here is the President’s address. At least, unlike Palin’s Facebook posts, it is indisputable that it’s the former president delivering the message: