George W. Bush: We Waterboarded Khalid Sheikh Mohammed And ‘I’d Do It Again’

George W. Bush: We Waterboarded Khalid Sheikh Mohammed And ‘I’d Do It Again’ 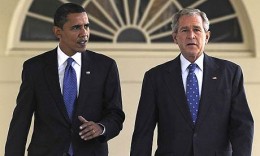 After mostly disappearing from the national spotlight after helicoptering away from the White House in January of 2009 former President George W. Bush appears to be laying the ground work for a comeback of sorts. Yesterday, the former Prez launched a Facebook page (and possibly a Twitter acct), presumably ahead of this fall’s release of his memoir Decision Points.

One suspects as he edges his way further into the media spotlight we may be hearing more remarks along the lines of what he told business audience in Grand Rapids, Michigan yesterday. Bush admitted that his administration had waterboarded Khalid Sheikh Mohammed, and that he’d do it again “to save lives.” Also? He has zero intention of returning to public life to criticize President Obama. From the Guardian:

“Yeah, we waterboarded Khalid Sheikh Mohammed,” the former president told a business audience in Grand Rapids, Michigan. “I’d do it again to save lives.”
[…]
In his speech, Bush also defended the decision to go to war with Iraq in 2003. He said ousting Saddam Hussein “was the right thing to do and the world is a better place without him”. But he said he was not tempted to criticise Barack Obama. “You are not going to see me in the public square criticising the president.”
[…]
Bush also talked about the role of religion in his life. “I prayed a lot. I really did. I prayed before every major speech. I prayed before debates. It was a very important experience.”

I think it’s fair to say a lot of people are going to be lining up for a copy of this book.