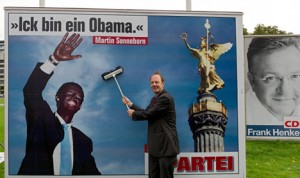 One German party leader, Martin Sonneborn, is sure to make an impression on voters. In anticipation of this weekend’s state elections in Berlin, Sonneborn erected a billboard featuring himself dressed as U.S. President Barack Obama. In blackface. The billboard also includes an unusual slogan: “I am an Obama.”

While his decision is making waves here in the U.S. — a country that includes minstrel shows in its recent history, and a place where blackface continues to have racist and uncomfortable implications — and among anti-racism groups in Germany, Sonneborn says he was merely trying to poke fun at the global hype surrounding Obama. It’s worth noting that he holds a rather unique place in German politics, having edited a satirical magazine and having founded a satirical political party called, easily enough, “Die PARTEI.” The party’s claim to fame? Its goal of someday rebuilding the Berlin Wall. (Laugh track.)

But let’s try and put this all in context, people, because humor is relative and cultural tastes may differ greatly from place to place. (Exhibit A: David. Hasselhoff.) HyperVocal accurately notes that Germany has something of a pattern of evidently not really “getting” race relations or black history as they relate to the United States:

The billboard follows some other questionably racist endeavors in Germany, which on some level could be chalked up to the vast cultural divide. In 2009, a frozen food company released Obama chicken fingers but admitted it wasn’t aware some might see the racist overtones of stereotyping blacks with a fried chicken product. That same year, Dresden’s Zoo renamed a mandrill, yup, a monkey-like primate, “Obama” in an unfortunate effort to honor the U.S. president. German daily die Tageszeitung honored then-candidate Obama during the 2008 election by referring to the White House “Uncle Barack’s Cabin.”

Maybe something here was lost in translation, so to speak, but we’re not even really sure how Sonneborn’s billboard works as satire. According to a quote he gave to The Local, Sonneborn professes to be both oblivious to the history of blackface… and unapologetic for his use of it:

No, I didn’t know that. If Americans associate it with that, then I’m sorry, but I’m not going to take it down.

Well. Thank goodness he didn’t make a billboard about the HPV vaccine, we suppose.