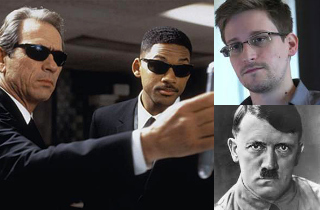 According to What Does It Mean’s Sorcha Faal, a Russian report on Edward Snowden’s leaked NSA documents claimed the material provides “incontrovertible proof” that an “alien/extraterrestrial intelligence agenda” has been running America’s domestic and foreign policy since the end of World War II.

This proof was confirmed by former Canadian Defense Minister Paul Hellyer, who believes that a race of aliens known as the “Tall Whites” works for the U.S. Air Force. According to Faal, Snowden’s documents reveal that the Tall Whites were also behind the rise of the Nazi’s military supremacy in the last 1930s. Apparently these Tall Whites have determined the invasive surveillance policy that spurred Snowden’s theft of the classified material:

Most disturbingly, this FSB report warns, is that the “Tall White” agenda being implemented by the “secret regime” ruling the United States calls for the creation of a global electronic surveillance system meant to hide all true information about their presence here on earth as they enter into what one of Snowden’s documents calls the “final phase” of their end plan for total assimilation and world rule.

All this is being overseen by President Barack Obama because of course it is. Faal warns that the Tall Whites, under Obama’s leadership, may have aligned with other, more dangerous extraterrestrials, so it’s a good thing FARS made this one of the most visited stories on their English-language website.