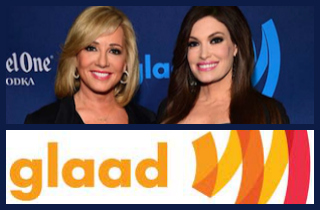 Earlier this morning, controversy arose from news that GLAAD issued a statement reacting negatively to the presence of two Fox News anchors at their recent media awards ceremony. The letter from the organization’s VP of communications Rich Ferraro slammed Fox’s “embarrassing, biased, and misinformed” coverage of LGBT issues, saying that if the two anchors — Kimberly Guilfoyle and Jamie Colby — want to attend future events, their network should first rethink its “abysmal” record on such issues.

In a written statement, Ferraro has clarified his remarks, emphasizing that he did not intend to make it seem as though Colby and Guilfoyle themselves are unwelcome at GLAAD events, but rather that the organization took issue with the fact that the day after the pair attended the awards ceremony, Fox allowed an anti-gay activist to make negative claims about homosexuality without any sort of pushback.

“My earlier statement was a reaction to FOX News’ coverage of LGBT people and not any individual journalists. A GLAAD executive did invite Kimberly and Jamie to the GLAAD Media Awards, and we were happy to have them, with the belief that they signaled a change in the way Fox News would cover LGBT issues.

But the next day, we had a flurry of reports that Fox News let anti-gay activist Tony Perkins make the false and dangerous claim on national television that ‘evidence’ shows that being gay is ‘overwhelmingly negative to both the individual and society.’

It was not my intention to offend Kimberly or Jamie. Part of our work at GLAAD is to raise awareness and visibility of allies from all walks of life, particularly among the growing number of conservatives who support LGBT people, and we look forward to working with voices like Kimberly, Jamie, and any other allies at FOX News to accomplish that.”