Glenn Beck Blasts New Obama Black Ad: ‘We’ve Got Your Back? Based On What, Race?’ 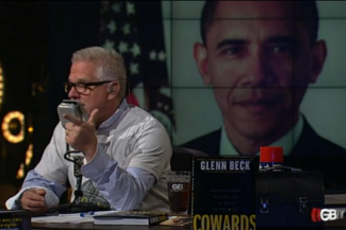 On his radio show Wednesday afternoon, Glenn Beck criticized President Barack Obama‘s new radio ad aimed at the black community as “the worst ad ever” that Beck believes sends the message that “I’m giving you free stuff and now you’ve got to watch my back.”

The new Obama-endorsed ad, which began running nationally this week, features a narrator telling the audience that it’s time to stand up and “show the president we have his back,” mixed with several clips of the president calling for cheaper college tuition, expanded health-care coverage, and taxes on the rich.

“We’ve got your back? Based on what, race?” Beck asked. He then claimed the ad “demanded” that black citizens have the president’s back, saying that “first of all, the President of the United States, the job of the President is to say to the American people ‘I have your back.'”

“The function of government is this,” Beck continued, “to protect your life so no one can scoop you up in the middle of the night and just take you and haul you away; to make sure that nobody is raping your family or killing your family. Life and liberty.”

“Life, liberty and pursuit of happiness. Hasn’t it always been that the President has our back on those three things? Hasn’t this president now violated those three trusts? And hasn’t he fundamentally transformed us to the point where we have to have a little jingle where we’re pledging our support to watch his back?”

Beck also claimed that the ad separates Americans even further, by specifically reaching out to the black community.

Check out the segment below, via GBTV:

And check out the offending Obama campaign ad below: