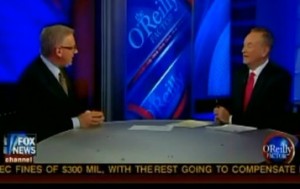 Earlier this week, First Lady Michelle Obama visited the beach in Panama City, Florida, delivering a simple message in support of the local businesses effected by the BP Oil Disaster: come to the beaches, they’re clean and open for business. This came up as a topic last night on The O’Reilly Factor, and guest Glenn Beck expressed outrage at what the First Lady chose to wear during the visit, calling it “the most Marie Antoinette I have ever seen of anything with Michelle Obama.”

Beck appeared with host Bill O’Reilly for a segment called “At Your Beck and Call,” and opened by first tackling President Obama’s use of “black theology” and “black liberation theology” claiming that that “it doesn’t matter what color he is… and something about how “his salvation is tied to a collective salvation” (which is reason why we should be concerned about our country.)

Then the topic shifted to the First Lady, where they first launched into Michelle Obama’s anti-obesity campaign. When O’Reilly asked what was wrong with the “First Lady simply wanting healthier and skinnier kids?’ Beck parried by stating that he “just (doesn’t) want the Government Health Czar to tell me that my kids can have X, Y, or Z.”

But by far the most absurd part of the conversation came when Glenn Beck chose to critique, nay, mock, the fashion choice made by Ms. Obama’s rather benign visit to the Florida beach. A transcript of this part of the exchange follows:

Beck: One more thing. The most Marie Antoinette I have ever seen of anything with Michelle Obama. Did you see the dress she was wearing when she went down and toured the oil spill?

O’Reilly: I did not.

Beck: This is good stuff. She looks like — who pulls this dress out of the closet and says ‘you know what I’m going tour the oil…’cause I can relate. It’s designer dress that is all white with black swatches all over it.

O’Reilly: You don’t think she was dressed appropriate for the oil spill?

Beck: I think this is an outrage. Look at the dress!

O’Reilly: Its an outrage?

Beck: Oh its absolutely and outrage!

O’Reilly deserves credit for calling out the inherent absurdity in Beck’s critique, and to be fair, there is a lot of laughter in the back and forth…so, they’re joking? They’re joking! But wait, this is the sort of blind and specious anti-Obama rhetoric that consistently comes from Glenn Beck, often without logic or reason as a support. Something tells me that the vast majority of Beck’s fans probably don’t see this as a joke, and take whatever he says as very, very seriously.

Maybe it’s time we should all start taking Glenn Beck more seriously, but for different reasons all together. (H/T NY Mag’s Daily Intel)