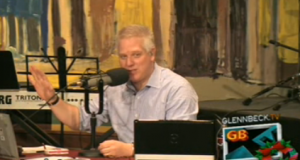 While CNN viewers watched in horror as a disgruntled man opened fire on members of a Florida school board, at least one Fox News pundit was watching along. Glenn Beck took to his radio show to discuss the unfortunate events, and he did so in classic Beckian fashion. As usual, he began with Media Matters and twisted his way to the “satisfying story of the year” – the Florida shooter’s supposed liberal leanings. “You can tell he’s a liberal because he can’t shoot,” he said, whipping his audience into a cheerful frenzy.

It started with him shaming the “despicable people” of Media Matters, as well as the media in general, for painting “Tea Party people as violent.” He stressed that impassioned people from either side of the aisle aren’t “nut jobs,” and that “Crazy” isn’t partisan. But his admirable message took a turn when he began to politicize last night’s shooting. His co-host took the floor to say:

According to the Blaze.com, Clay Duke, the man who opened fire on a Florida school board Tuesday, posted a “last testament” on Facebook decrying the wealthy and linking to a slew of progressive sites including… Media Matters!

Beck, of course, chimed in to exclaim “Media Matters!” along with his wingman. Anyway, this all stemmed from Clay Duke’s Facebook page, which lists Media Matters, Warren Buffet, and theprogressivemind.info as some of his interests.

Update – To be fair, Glenn Beck ended the segment by making perfectly clear the role that Media Matters played in this awful event:

Glenn: Now, let me make one thing clear, because I know that there’s someplace, some pimply faced, sweaty 18-year-old kid who wants to make a name for himself. I’m going to be George Soros’s hero, and he’s right now in his mom’s basement typing away his latest blog for Media Matters. Let me make this very clear. Media Matters did not try to go in and shoot the school board. It was the crazy nut job that did it. Period.
Nobody’s responsible for making anybody go do anything violent except crazy people who decide that violence is the answer. Yeah, that’s who did it.

STU: And Media Matters is absolutely not responsible for that. It’s his fault.

[Via The Right Scoop]