Glenn Beck Mocks Rep. Maxine Waters For ‘Toning It Down’ By Telling Tea Party To ‘Go To Hell’ 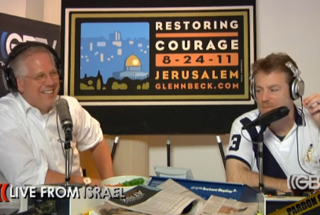 Glenn Beck has spent most of the past week preparing his large “Restoring Courage” event in Israel, but that doesn’t mean he hasn’t been kept informed on the events here in America. On his program this morning, Beck parsed through the recent town hall comments by Rep. Maxine Waters, laughing at her for what he interpreted as ignoring the crowd in front of her, as well as ignoring the fact that “the President is intentionally dismantling the lower and middle class.”

Rep. Waters has been making headlines as she tours the country with the Congressional Black Caucus this month, as she has faced lively audiences demanding help (the unemployment rate in the black community is astronomically high, and most town halls have been attended by many professionals who are out of work). Her responses so far? That while she “loves” the President, “we’re getting tired” of the inaction– and in a subsequent discussion, “the Tea Party can go straight to hell.”

Beck played both clips, but took longer in analyzing the first, where he accused Rep. Waters of putting words in the crowd’s mouth. “Notice the crowd is like ‘no, no, that’s not right– we don’t love the President!'” Beck argues, while Rep. Waters tells them they do. “Let me finish telling you what you think!” he jokingly mimicked her. Beck continued to note that “Your unemployment for African Americans it through the roof” because “the President is intentionally dismantling the lower and middle class.” Beck stuck to this argument because “I’ve read Saul Alinsky… I’ve read the manifesto from the Weather Underground” and “I no longer believe in coincidence with this president.”

He then turned to Rep. Waters’ “go to hell” comment, which he found comical in its abrasiveness, and mockingly cheered. “When she’s told that she needs to turn down the rhetoric, she’ll turn down the rhetoric!” Beck laughed, obviously not believing that “telling those who have a different perspective than us to go to hell” was particularly constructive or toned down. Following Rep. Waters’ example, co-host Pat Gray just told him to “go to hell” for that comment.

The segment from this morning’s Glenn Beck Program below: