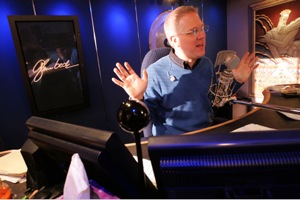 With Justice John Paul Stevens officially stepping down from the Supreme Court, the pundits kicked the name game into high gear yesterday. Glenn Beck, however, didn’t express much hope that Barack Obama would pick someone moderate, so instead of speculating, he gave the president some words of wisdom on his radio program: his best bet is to pick a “gay, handicapped, black woman who’s an immigrant.”

Noting that “[Justice Sonia] Sotomayor, I’m sorry gang, she’s a radical,” Beck warned that Obama would be choosing another “radical” like her, so rather than make a wish list of people he would want to see on the court, he told his viewers to brace themselves for the onslaught of political correctness that the next nominee was sure to bring: “If [Obama]’s smart, he’ll find a gay, handicapped, black woman who’s an immigrant. Because that way.. she could be the devil, she could say ‘I hate America, I want to destroy America’…” His logic? The left is bleeding moderates, their “base is becoming smaller and smaller,” and so, to energize the people they have left, they need to evoke “hatred and fear.”

Needless to say Media Matters pounced on the clip immediately, conveniently removing the “if he’s smart” modifier to make it sound like Beck is suggesting he has some sort of inside info on who the nominee is. In reality, Beck’s conditional is absolutely right: historically oppressed groups centered around involuntary personal traits are the sacred cows of politics. Regardless of “radicalism,” which is relative, it is difficult to argue that at a certain level of career success, being of a minority group actually becomes a shield. If Beck is correct that Obama is seeking out a “radical” justice, he absolutely should seek someone out who enjoys the privilege of standing behind every possible barrier against legitimate criticism– just ask Michael Steele.