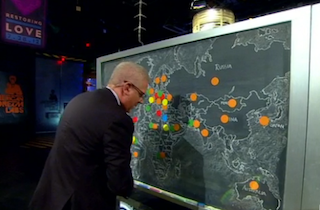 Glenn Beck is no stranger to ominous predictions and this week he and his chalkboard trotted out some more doom and gloom about what the future holds for America — and the rest of the world. After the inevitable “reset,” the global landscape and power balance will be unrecognizable, Beck asserted. America will be a “third-world state.”

“The last thing before world resets is war,” Beck informed. The world we live in now is at “the breaking point,” he asserted, noting that we’ve gone from being the biggest creditor to the biggest debtor. Eventually the Western dominance we’ve grown accustomed to will be no more.

Thus Beck sought to map out, literally, what the new world order will look like — the map of the world on one chalkboard, and a color-coded global hierarchy on the other. From top to bottom, the powers will be: “Thug-ocracy/Communist (first world),” “Muslim/Brotherhood,” “Nazi Influence (golden dawn,” “Free,” “3rd World Thug-ocracy (serf state).”

Then he broke it down — with magnets! Only Canada, Israel, and Greenland will be free. Dotting the board with green magnets, Beck explained the Islamic influence that will exist throughout the Middle East and parts of Africa, Europe, and Southeast Asia. Russia and China will comprise the top tier, the dominant, communist thugs. Their influence will infiltrate into parts of Africa, much of Asia and Europe.

Next up: the Nazi influence. That’ll be in Europe (logically enough), and yes, in parts of the U.S. too. China “will make a deal with Islam,” and they’ll share global dominance. The Islamic influence will stretch into the U.S. as well.

America’s leader “will be a technocrat that will answer to China,” Beck explained. “We are, I believe, unfortunately, in the end, going to be a third-world state.”

Beck’s glass is half empty to say the least.

Take a look, via Blaze TV: