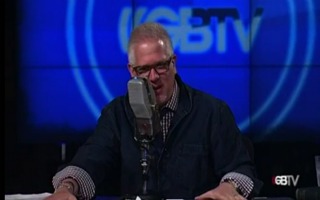 Glenn Beck mocked MSNBC host Chris Matthews for his poor showing on a recent episode of Jeopardy, after Matthews mocked former Alaska Gov. Sarah Palin saying that she would perform terribly if she made an appearance on that program.

Beck played a clip of Matthews wondering if Palin had the intellectual capacity required to excel in a format like that of Jeopardy:

I’d like to see her on a few episodes of celebrity Jeopardy. or It’s Academic with Mac McGarry. Just see if she knows anything.

While setting up the clip, the hosts continued to hear the “hoof beats” of an approaching stamped of what Beck characterized as “something bad” coming for Matthews.

They then played a clip of Matthews’ recent appearance on Jeopardy, but stopped themselves midway through his introduction when they learned that he was a speechwriter for former President Jimmy Carter. “Now I feel like a bully,” said Beck. “Now it’s unfair.”

“And he was a dietician for Jeffery Dahmer,” mocked co-host Pat Gray.

“He was the exercise coach for Pavarotti,” tagged Beck.

Back to Matthews’ Jeopardy performance, where he wrestled with the answer format before finally settling on the correct “what is” response after three attempts to answer the question, “at blank, soldier.”

Beck plays another clip of Matthews stumbling over the answer to the question, “full name of the U2 pilot shot down over the Soviet Union in 1960.”

“Gary Powers,” Matthews responded twice before the answer was stolen by CNN reporter Lizzie O’Leary who correctly answered “who is Francis Gary Powers.” Beck said that he, too, would have failed to answer that question correctly.

They proceeded to play several clips of Matthews failing to correctly answer questions, including “how many letters” in the word Istanbul, and eventually losing to former White House Press Sec. Robert Gibbs.

“I think Jeopardy is actually pretty hard,” said Beck. His co-hosts agreed, but mocked Matthews for suggesting that Palin would be so intellectually deficient that she would perform miserably on the program.

Watch the segment below via Glenn Beck TV: