Glenn Beck Shoots Down Rand Paul: If Police Get Drones, ‘The 2nd Amendment Is Absolutely Dead’ 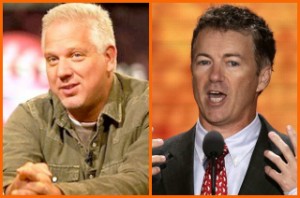 Senator Rand Paul‘s media tour following his “misunderestimated” statements on drones brought him to Glenn Beck‘s radio show Friday, where the two men discussed the prospects of a terrifying future where police cars have “robotic firing arms” that take down criminals with the push of a button. If that ever happens, Beck told Paul, “the Second Amendment is absolutely dead.”

After confirming earlier in the week that he would be OK with armed drones being used to kill American citizens if they were, say, coming out of a liquor store brandishing a gun, Paul explained to Beck he’s not talking about a “drone from 50,000 feet dropping hellfire missiles on these people.” Instead he’s talking about small helicopter-like drones that would come out of police cars as described above.

“I got news for you,” Beck interrupted. “If that ever happens? The Second Amendment is absolutely dead no matter what, unless we at least have fully automatic weapons.” Paul’s scenario, apparently meant to appease Beck’s concerns, instead played directly into the host’s worst totalitarian nightmares. “That kind of technology in the hands of a government…” he said, before trailing off.

Paul countered that we use robots to dismantle bombs and nobody seems to have a problem with that. “It’s not the technology, it’s the circumstance,” Paul said, repeating a point he made to Sean Hannity Thursday.

“You may in the end be right,” Beck conceded, “but I am against it, because I don’t want to give this government any more power.” It was a sharp disagreement between two men, who by many measures should be in agreement when it comes to civil liberties.

Listen to audio below, via Glenn Beck: