Glenn Beck: Time Magazine ‘Monsters’ Are ‘Damn Near Treasonous’ For Naming The Protester As Person Of The Year 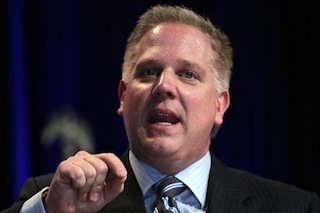 Yesterday, when Time Magazine announced that “The Protester” would be 2011’s “Person of the Year,” the choice seemed destined to drive all conservative commentators into a tizzy (perhaps on purpose; get more headlines, sell more copies). In fact, from the instant the announcement was made, many in the Mediaite office couldn’t help but thinking, “Oh, man. Glenn Beck is going to have a field day with this.” Beck, of course, being the guy who predicted at the beginning of the Occupy Wall Street movement that protesters would soon be shooting rich people in the street. So, we were pretty shocked when Beck explained on his radio show yesterday that he thought it was a perfect choice and that the current movements for social change are the most important parts of-

Beck started his analysis by mocking Time‘s recent practice of giving the Person of the Year award to things that aren’t any one specific person. Says Beck: “I’m nominating for Glenn Beck Person of the Year, the fork.” He then compared the choice to Time‘s 1930’s era pick of Adolf Hitler and Benito Mussolini (Mussolini actually never won. Beck should have gone with Joseph Stalin who won twice). Says Beck: “Congratulations, Time, you’ve done it again!”

Beck asked why protesters get celebrated by Time this year but the magazine didn’t include any pictures of Tea Partiers in the “This Year in Pictures” photo collection in 2009. He also pointed out that the cover was designed by Shepard Fairey, the artist who made the famous “Hope” posters of then-candidate Barack Obama (the cover was designed by Fairey off a photo taken by Ted Soqui).

Beck then went a step further, saying that Time‘s could be considered tantamount to treason:

“Our media is so far out of control, it’s obscene. It’s obscene. It’s damn near treasonous. It really is. They are traitors to the freedom and dignity of every man, woman, and child on this planet. The Arab Spring? That brought dignity, dignity, to people who had never had it? Sharia Law is bringing dignity? How about to the Coptic Christians? How about to the women? That’s bringing dignity? DIGNITY? The way that Maummar Gaddafi – granted, a monster – was dragged out to the streets and just killed in the streets? That’s dignity? You people are monsters. You really are. You people in the press are traitorous monsters to the dignity of free men and history will be your judge.”

Listen to the clip from Mercury Radio below: