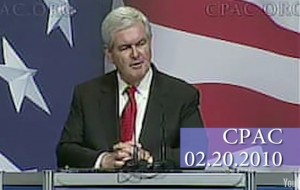 In a trick as old as primary politics, former Massachusetts Governor and perennial second-fiddle GOP presidential candidate Mitt Romney launched a positive ad today, featuring praise of his business acumen from rival (and current frontrunner) former House Speaker Newt Gingrich. What makes this particular ad somewhat ironic is that it seems to be a direct response to an eviscerating attack from Gingrich on the subject of…Mitt Romney’s business acumen. It’s also noteworthy for what it doesn’t include: any facts to refute that attack.

While cutting an ad in which your opponent praises you is superficially clever, it’s a bit self-defeating when you think about it for a second. If your premise is that your opponent has poor judgment, why should voters find that opponent’s judgment sound just because he’s praising you?

Romney’s ad, entitled “Praise,” makes use of an eight-second clip from Gingrich’s 2010 speech at the Conservative Political Action Conference, and pads out the 30-second spot by playing it twice. Frankly, when you consider how long Newt Gingrich has been around, it would be a surprise if there were any national Republican figures he hadn’t said eight seconds worth of nice about.

In that speech, Gingrich used Romney to take a shot at President Obama, saying, “I know that Governor Romney made a powerful case here and, frankly, Governor Romney in his business career created more jobs than the entire Obama Cabinet combined, so he could actually talk about it.”

The ad begins with that quote, then flashes to the following graphics. See if you can figure out which one has to do with the jobs created during Romney’s business career:

“CONSERVATIVE BUSINESSMAN FOR OVER 25 YEARS”

“AND WHAT DOES NEWT GINGRICH HAVE TO SAY ABOUT MITT ROMNEY’S RECORD?”

Cue a replay of Gingrich, in uncomfortable close-up now, saying “I know that Governor Romney made a powerful case here and, frankly, Governor Romney in his business career created more jobs than the entire Obama Cabinet combined, so he could actually talk about it.”

Yes, we are supposed to take Gingrich’s word for it, because the campaign memo accompanying the ad includes background on everything but that claim. As I’ve written here before, there’s plenty of evidence that Romney profited from layoffs time and again, and absolutely no clear evidence that Romney created more jobs than he lost, or how many. Conspicuously, his own ad doesn’t even try to make that case. Also telling is the very fact that measuring his jobs performance is so difficult, illustrating the degree to which human beings with jobs are a non-factor in the way businesses measure “success.