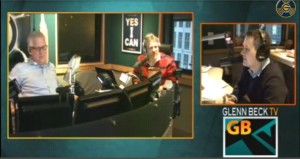 On his radio show today, Glenn Beck and his crew had some fun responding to Joe Scarborough‘s verbal assault. Co-host Pat Gray comedically played offense making fun of Scarborough, and referring to Morning Joe as “morning cup of tea or whatever he calls his stupid show.” Gray summed up Scarborough’s rant as simply him being jealous and obsessed with Beck’s success. Beck though was eager to take the high road and focused on disputing some of Scarborough’s accusations.

Scarborough claimed that Beck is on television every day saying President Obama is a racist and a Marxist. Beck corrected that record by saying he actually only called the President racist once, and it was two years ago, and he apologized for it. Regarding the Marxist tag, Beck argued that it’s not a slam, it’s simply him identifying the President’s ideology. Furthermore, Beck wondered why Scarborough isn’t as concerned that every day on his MSNBC show there are baseless claims that the Tea Party is violent.

The funniest moment though comes near the end when Gray goes wild on Scarborough’s admission that he actually doesn’t watch Beck, but has “friends” who tell him everything. Gray screams, “how do you know what Glenn Beck says and does. You moron. Joe, there’s a reason that everyone you know listens to and watches Glenn’s show, including your mom, and not yours – you suck!” Beck though, eager to avoid any incorrect implications, corrects Gray and says he’s sure Scarborough’s mother probably makes some time to watch her son’s show too.

Check out the audio from the Glenn Beck Program below: