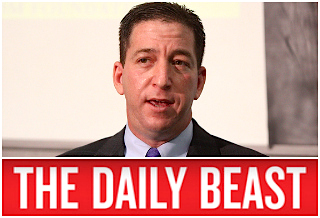 The Daily Beast published an article Friday claiming Edward Snowden “lied about his contacts with China,” and therefore does not deserve clemency as The New York Times editorial board has argued. it wasn’t long before journalist Glenn Greenwald began tearing down the piece and its author, Gordon G. Chang, on Twitter.

Below is a look at what Greenwald had to say about the piece Friday afternoon, while likely driving large amounts of traffic to it:

Such crappy "journalism": to smear govt critics with lies, claim you have an unnamed "source" whispering in your ear http://t.co/1yE90CzyO9

DailyBeast: we're giving platform to a Glenn Beck regular to spew evidence-free innuendo based on an invisible source http://t.co/1yE90CzyO9

Would any self-respecting editor publish innuendo like this – "according to one of my sources in Hong Kong"? http://t.co/1yE90CzyO9

"He may also have been a spy." Or he may not have been. Who knows? Just print it – #SomeoneToldMe #Journalism http://t.co/1yE90CzyO9

Greenwald is particularly outraged by the fact that Chang attributes his accusations against Snowden to an anonymous source in Hong Kong who allegedly claims the former NSA contractor has “high-level contact” with Chinese officials there. In his June discussion with Greenwald in that country, Snowden said, “I have had no contact with the Chinese government.”

Chang also credits the Beijing government with not only helping “orchestrate” Snowden’s flight from Hong Kong to his ultimate destination in Russia, but also “encouraging” him to leave Hawaii in the first place. Neither of those assertions are accompanied by sourced evidence.

As one of Greenwald’s followers pointed out, Chang’s “most famous book,” The Coming Collapse of China,

“predicted China would collapse by 2006.”