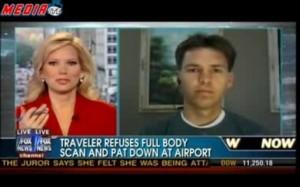 A cold flame war has broken out between Salon’s Glenn Greenwald and reporters Mark Ames and Yasha Levine of The Nation over the latter’s article, which attempts to unravel “The Washington Lobbyists and Koch-Funded Libertarians Behind the TSA Scandal.”

Central to that article’s premise is the notion that John Tyner, the originator of the “junk-touch” protest heard ’round the world, is not what he appears to be. Greenwald rightly labels the article a “smear” (an opinion shared by Nation reporter Jeremy Scahill), prompting a lily-livered response from Ames and Levine, and widespread refudiation from fellow liberals.

Aside from being a fun bit of grab-some-popcorn internet entertainment, this feudlet is a handy object lesson in policing your own side.

In the original Nation piece, the authors establish their premise, that Koch Brothers-style Astroturfers are “behind the TSA scandal,” using little more than their Spidey sense and some “scare quotes:”

Does anyone else sense something strange is going on with the apparently spontaneous revolt against the TSA? This past week, the media turned an “ordinary guy,” 31-year-old Californian John Tyner, who blogs under the pseudonym “Johnny Edge,” into a national hero after he posted a cell phone video of himself defending his liberty against the evil government oppressors in charge of airport security.

As Greenwald points out, Ames and Levine toss several paragraphs worth of verbal field greens together, but the word salad just doesn’t go with the rest of the meal, which is, itself, a pretty thin gruel of “ties” and “trails” that, absent a connection to Tyner, reveals nothing more than natural opportunism. The folks looking to use this crisis to privatize airport security (or to normalize racial/ethnic/religious profiling) aren’t behind this scandal, they’re on top of it, riding it for all it’s worth.

This is important to note because, in their response to Greenwald, Ames and Levine sort of concede that their treatment of Tyner might maybe potentially possibly have been a smidge unfair, but the rest of their article was rock-solid:

In retrospect, our article was less than clear about Tyner’s lack of Astroturf affiliations, and we regret in particular including extraneous details from the Union-Tribunearticle about Tyner’s past—that he went to a private Christian school and lived in a Republican community near a Marine base—because it distracted readers like Greenwald from the article’s main findings.

We believe that Tyner is in all likelihood innocent in his motives, but our larger point is that his discourse and the movement that has embraced it is far from innocent. In focusing entirely on our characterization of Tyner, Greenwald ignores the larger thrust of our argument and the vast majority of the evidence assembled in the piece, leaving a distorted impression of it.

Ames and Levine then resort to the time-honored tactic of the journalist who’s losing an argument: “Why didn’t you call me?”

How did Greenwald get to this conclusion? We’re stumped—he never tried contacting either one of us before publishing his story. That’s one big reason why we’re both so disappointed—because that’s what journalists do: we call our subjects to confirm, or not confirm, evidence and suspicions that we have compiled.

There’s just one problem with this: Greenwald was writing a critique of a news story, not a news story of his own. There shouldn’t be any reason for him to call a journalist. It’s the journalist’s responsibility to make sure everything is on the page. It reminds me of those drug commercials that tell you to “ask your doctor” about their product. If the drug is any good, I shouldn’t have to ask him, unless he’s a really shitty doctor. Greenwald puts it this way:

As I have told the multiple establishment journalists over the years who raised the same “you-didn’t-call-me-first” complaint:  with media criticism, what a journalist claims after the fact about what they published doesn’t really matter; what matters is the piece they published to the world.  That stands on its own.  And that’s what I assessed and critiqued.

What’s heartening about this episode is the willingness of The Nation’s fellow liberals to police their own side:

In addition to their own Nation colleague Jeremy Scahill (who denounced it as a “shameful smear“), Mother Jones‘ News Editor Daniel Schulman wrote:  “This Nation story isjournalistic malpractice of the worst kind“; The American Prospect‘s Scott Lemieux, on his blog, called it “Liberal McCarthyism” and an “embarrassment“; and the usually rhetorically restrained Ezra Klein condemned it as a “hit piece” which I had “rightfully hammered.”

I often encounter resistance from liberals when criticizing one of their sacred cows, but this feud illustrates the importance of doing just that. Liberals take pride in being the smart, reasonable appreciators-of-nuance that must save the knuckle-dragging Fox Nation from itself. If you’re going to sit on a high horse, you’d better be able to handle the altitude, and hold yourself to a standard that’s orders of magnitude greater than that of your opponent.