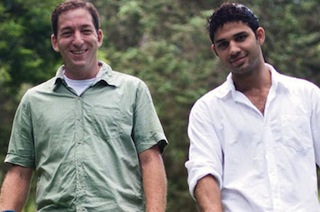 According to the Guardian, David Miranda, partner of journalist Glenn Greenwald, was detained for nine hours in London’s Heathrow Airport on Sunday, while traveling from Berlin to the home he shares with Greenwald in Rio de Janeiro, Brazil.

Miranda was held for nine hours under schedule 7 of the Terrorism Act 2000, the maximum allowable duration a suspect can be kept before they must be either arrested or detained. He was not charged, but had much of his luggage confiscated by British authorities.

Greenwald wrote Sunday that the law is meant to detain people in order to question them about terrorist activities, but that the British authorities instead questioned Miranda about the time he had just spent in Germany with Laura Poitras, the filmmaker with whom Greenwald had worked on his NSA surveillance reporting:

“They completely abused their own terrorism law for reasons having nothing whatsoever to do with terrorism: a potent reminder of how often governments lie when they claim that they need powers to stop “the terrorists”, and how dangerous it is to vest unchecked power with political officials in its name.”

[…] “This is obviously a rather profound escalation of their attacks on the news-gathering process and journalism. It’s bad enough to prosecute and imprison sources. It’s worse still to imprison journalists who report the truth. But to start detaining the family members and loved ones of journalists is simply despotic. Even the Mafia had ethical rules against targeting the family members of people they feel threatened by. But the UK puppets and their owners in the US national security state obviously are unconstrained by even those minimal scruples.”

Understand: What the UK govt just did re @ggreenwald‘s partner is a declaration of war against the @guardian and journalism by extension.

First publishing info abt US abuses amounted to aiding al Qaeda (tho they lost in court). Now it MAKES you a terrorist.

The only logic for detaining @ggreenwald‘s partner is intimidation: perverted message-sending. And under a pretense of "terrorism!" Surreal.