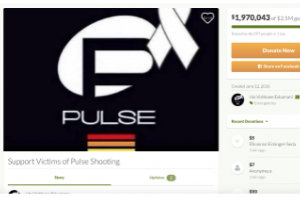 Though the Orlando shooting is undoubtedly one of the worst single moments of American history, it still gives the world a chance to observe human goodness.

One of the state’s biggest pro-LGBT organizations, Florida Equality, has started a GoFundMe fundraiser to provide support to the victims, and they’ve blown past their goals with unprecedented speed on the site.

Equality Florida’s development officer Ida Eskamani set up the page, imploring donors to give anything they can spare to help ease the pain victims are facing after the deadly shooting.

“We are heartbroken and angry that senseless violence has once again destroyed lives in our state and in our country,” the page reads. “We stand in solidarity and keep our thoughts on all whose lives have been lost or altered forever in this tragedy.”

Mic reported that the site originally set their goal for $100K, but not only did they smash through that checkpoint, but GoFundMe’s vice president Dan Pfeiffer announced that they have become the fastest campaign to hit the million dollar mark.

The campaign for the victims of the #PulseNightclub shooting reached $1 million faster than any in @gofundme history https://t.co/45RxYJXdDH

As of right now, the site has surpassed $2 million in donations. Florida Equality says they will work alongside the National Center for Victims of Crime and attorneys who worked on previous mass shooting cases to ensure the money goes to the victims.

“The amount of love and compassion felt around the world towards the victims and their families of the Pulse shooting is a testament to the incredible good is in the world,” the site said in an update.

You can visit the page to give a donation here.