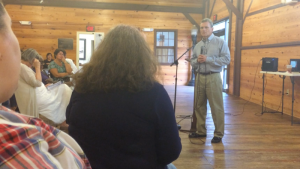 GOP Rep. Earl Carter from Georgia has been attending local town halls, which is admittedly admirable considering most of his fellow Republican lawmakers have long since abandoned this duty amid heated national debate about health care. To be a Republican lawmaker and actually do your job is pretty respectable in today’s political climate.

But in either case, brought to question about the issue of rape kit legislation, Carter seized on an opportunity to attack sanctuary cities.

In footage sent by a Georgia resident who attended Carter’s Aug. 8 town hall to Jezebel, Carter appears ambivalent about the fact that, as of January 2017, Georgia has 10,314 untested kits.

“What can you do as a congressman to help Georgia process these rape kits?” a woman asks Carter in the video.

Testing rape kits is an expensive process, but one that has, in states like Colorado, yielded impressive leads and many convictions. Gathering the forensic evidence to assemble a rape kit can be a deeply traumatic experience for survivors, and one that’s altogether useless if the kits go untested. And, of course, since who gets to have a rape kit assembled is typically left up to the discretion of law enforcement officers based on their personal perceptions and biases of a survivor as credible or not, policy around rape kits is clearly problematic on multiple fronts.

But Carter, while willing to dispense funding to help test Georgia’s many untested rape kits, is only willing to on one condition: “There are grants available, and we’ll do everything we can to help — unless they’re a sanctuary city,” he said, with a laugh.

One woman followed up about this condition offered by Carter, asking if he had been joking.

“Were you serious about the sanctuary city remark, or was that just a joke? Like, you wouldn’t provide grants to test rape kits if it was a sanctuary city?”

“No, we do not, I voted for a bill that does not allow federal law enforcement grants to go to any sanctuary cities, I was very serious about that,” Carter said.

“Do you feel like that serves your constituents?” Shelton asked.

“Yes, it does,” Carter said. “It does serve my constituents, because if you’re a sanctuary city, that means you are refusing to enforce our immigration laws here in the United States, and if you’re doing that then I don’t want to be sending you any federal grants to go to your city.”

And, of course, as Ellie Shechet, who covered this incident for Jezebel, notes, it’s clear that Carter has hardly thought this grand scheme to punish insubordinate municipal governments. “It’s unclear who, exactly, Carter is interested in punishing in this particular scenario, since it’s rape victims—not law enforcement, or government officials—who would be most impacted here,” Shechet pointed out.

Rep. Carter has taken a number of equally appalling stances, expressing enthusiastic support for President Trump‘s travel ban with little justification for this stance beyond, “I don’t want ’em serving in the military, I’m sorry,” and has additionally suggested that someone “snatch a knot” in GOP Sen. Lisa Murkowski’s “ass.”