GOP Giving Up on Michael Grimm, but He’ll Always Have Geraldo

GOP Giving Up on Michael Grimm, but He’ll Always Have Geraldo 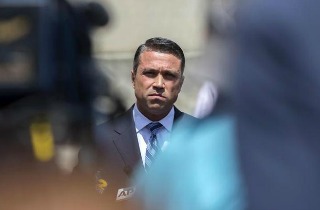 On Monday, Rep. Michael Grimm (R-NY) was indicted on 20 counts of fraud. While Grimm maintained his innocence and pledged not to resign from office, that may not be enough for Republican officials. According to CNN, Republican Party leaders have acknowledged that Grimm already faced a difficult reelection bid and are considering withdrawing “financial and strategic support” for the embattled congressman’s reelection effort.

The FBI alleges in the indictment against Grimm that he withheld over $1 million in receipts and concealed the wages of employees who worked at his New York City restaurant, Healthalicious. Grimm is also charged with wire and mail fraud, perjury, helping prepare false tax returns, and hiring undocumented workers.

“By withholding party help, the GOP would likely be effectively ceding the House seat to Democrats, who see the race as one of their top pick up chances this November,” CNN’s Dana Bash reported on Tuesday.

But while Republicans are jumping ship on Grimm, the unpolished congressman from Staten Island will apparently maintain the support of Fox News Channel host Geraldo Rivera.

“Are you kidding me?” Rivera remarked on his WABC-AM radio program on Tuesday. “You indict an FBI hero agent, a combat veteran of the United States Marines, a two-term congressman, the only Republican in the area, and you indict him for hiring undocumented immigrants?”

“You go to any kitchen of any restaurant in this city, you’re going to find undocumented immigrants,” the Fox hot continued. Calling the charges a “politically motivated witch-hunt,” Rivera insisted that Grimm is “absolutely right.”

“This is appalling. This is insulting,” the host continued. “Find some evidence. But you can’t indict a person who stands in exactly the same place as 5,000 other restaurant owners.”