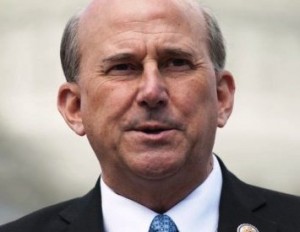 Gohmert told Gaffney that anti-Muslim investigations are necessary because President Barack Obama made “horrendous decisions” in backing the “revolutions in Northern Africa and across the Middle East and to the Far East.” He chalked such decisions up to the administration listening closely to the advice of Muslim Brotherhood members. Transcript below (emphasis added in bold):

GAFFNEY: Congressman Gohmert, let me just ask you quickly because you were one of five members of the House of Representatives, Newt Gingrich called you all the National Security Five, who back in June of this year wrote letters to Inspectors General of five different departments raising the question that some of these dismal policies that have resulted in the Obama administration embracing Islamists at home as well as abroad and finding itself I would argue squarely on the wrong side of history as far as freedom is concerned, may be a function of these Muslim Brotherhood associated individuals who are serving in or advising the Obama administration. Looking at what’s happening now, looking at what has developed since you wrote those letters, do you feel that that issue should be raised anew and much more aggressively as Congress looks into the fiasco in Benghazi and now more recently in Egypt?

GOHMERT: Absolutely. I think it almost makes a prima facie case when you look at the decisions made by this administration over the last couple of years, or actually all four years. You look at the decisions it made especially in the last two years in going through the revolutions in Northern Africa and across the Middle East and to the Far East, and the only way you can explain the horrendous decisions that were so completely wrongheaded would be if this administration had a bunch of Muslim Brotherhood members giving them advice.

As Gaffney noted, Gohmert was among the handful of Republican representatives who alleged that Hillary Clinton‘s aide Huma Abedin had ties to the Muslim Brotherhood. He was so fervent in his beliefs that he shouted down Homeland Security Secretary Janet Napolitano when she challenged his assertions in Congress.

Later on in the program, Gohmert accused the president of “wanting a new Ottoman Empire to take place” by allegedly “allowing” al Qaeda and the Muslim Brotherhood to take over in post-Gaddafi Libya.