GOP Senator: ‘If Anything, We Have an Under-Incarceration Problem’ 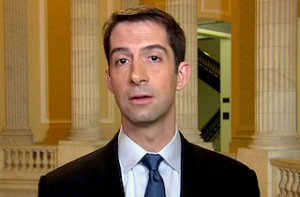 One of the rare bits of bipartisan agreement on Capitol Hill is criminal justice reform and the need to address over-incarceration. But one Republican thinks the U.S. has the exact opposite problem.

Senator Tom Cotton delivered a speech to The Hudson Institute today, and according to Politico, he had a lot of things to say about the idea that there’s a mass incarceration problem in the criminal justice system.

He argued that plenty of criminal perpetrators are “never identified or arrested, let alone prosecuted, convicted, and jailed,” so “if anything, we have an under-incarceration problem.”

Cotton said the U.S. has to emphasize security first and made this argument against voting rights for felons:

“Should murderers, rapists, and others whose behavior fall so far outside the norms of our society be immediately accommodated? Given recidivism rates, should we create an automatic pro-crime constituency in our society? Should felons be trusted to elect legislators who make the law, prosecutors who enforce it, and judges who apply it?”

A few months ago, he spoke out against a criminal justice reform bill in the Senate by saying there is a serious risk of crimes committed by felons released early and that “the Senate would be launching a massive social experiment in criminal leniency without knowing the full consequences.”

In his remarks today, Cotton also scolded the “rush to demonize law enforcement whenever force is used” and how “cheap demagoguery” takes the place of “facts and hard data.”