Gov. Walker Has 20 Min. Conversation With Prank Caller Pretending To Be David Koch 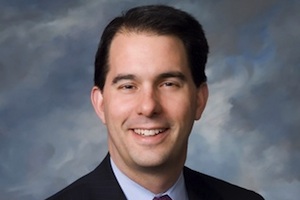 Yesterday, Ian Murphy, the editor of the website Buffalo Beast (which is down at the moment of this writing, presumably because of traffic) called up Scott Walker, the embattled governor of Wisconsin. However, Murphy identified himself as David Koch. Walker took the bait and engaged in a 20 minute conversation about the protests, the unions, the “Democrat bastards,” and the folks on Morning Joe. Walker’s staff has since confirmed that it is him on the phone.

In the conversation, “Koch” and Walker discuss the many ways to end the crisis. One section even includes what appears to be Walker’s plan to set a bit of a trap for the missing Wisconsin Democrats:

“An interesting idea that was brought up to me by my chief of staff, we won’t do it until tomorrow, is putting out an appeal to the Democratic leader. I would be willing to sit down and talk to him, the assembly Democrat leader, plus the other two Republican leaders—talk, not negotiate and listen to what they have to say if they will in turn—but I’ll only do it if all 14 of them will come back and sit down in the state assembly. They can recess it… the reason for that, we’re verifying it this afternoon, legally, we believe, once they’ve gone into session, they don’t physically have to be there. If they’re actually in session for that day, and they take a recess, the 19 Senate Republicans could then go into action and they’d have quorum because it’s turned out that way. So we’re double checking that. If you heard I was going to talk to them that’s the only reason why. We’d only do it if they came back to the capitol with all 14 of them. My sense is, hell. I’ll talk. If they want to yell at me for an hour, I’m used to that. I can deal with that. But I’m not negotiating.”

Later “Koch” talks about “planting some troublemakers” but Walker shuts it down, while admitting they’ve “thought about it.”

Most interesting for us, perhaps, is Walker’s description his time on MSNBC:

“WALKER: Sooner or later the media stops finding it interesting.

“KOCH”: Well, not the liberal bastards on MSNBC.

WALKER: Oh yeah, but who watches that? I went on Morning Joe this morning. I like it because I just like being combative with those guys, but, uh. You know they’re off the deep end.

This is the statement released by Walker’s spokesperson:

“The Governor takes many calls everyday. Throughout this call the Governor maintained his appreciation for and commitment to civil discourse. He continued to say that the budget repair bill is about the budget. The phone call shows that the Governor says the same thing in private as he does in public and the lengths that others will go to disrupt the civil debate Wisconsin is having.”

You can listen to Buffalo Beast’s recordings of the calls below. It’s been split into two parts.