Gov’t Collects Logs Of Every Piece Of Mail Sent in The United States, NYT Reports

Gov’t Collects Logs Of Every Piece Of Mail Sent in The United States, NYT Reports 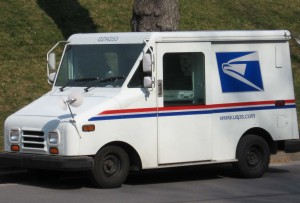 If the government collecting tons of metadata on phone and online communications has made you consider sticking with the Postal Service, then you may want to read this first. The New York Times reports today on how government law enforcement agencies are collecting logs on every single piece of mail sent within the United States. USPS computers take photos of the outside of every piece of mail (they need a warrant to actually read the contents) and send them to the agencies that request the information.

RELATED: Lindsey Graham Says He Would Suggest Censoring The Mail, If He ‘Thought It Necessary’

The Mail Isolation Control and Tracking program started in 2001 after a number of anthrax attacks that killed five people. It first came to public attention a few weeks ago by the FBI during its investigation into ricin-laced letters sent to President Obama and New York City Mayor Michael Bloomberg.

The Times details how a New York man found out last year the USPS was tracking him, and explains exactly what the program is and how it works.

Mr. Pickering was targeted by a longtime surveillance system called mail covers, a forerunner of a vastly more expansive effort, the Mail Isolation Control and Tracking program, in which Postal Service computers photograph the exterior of every piece of paper mail that is processed in the United States — about 160 billion pieces last year. It is not known how long the government saves the images…

The mail covers program, used to monitor Mr. Pickering, is more than a century old but is still considered a powerful tool. At the request of law enforcement officials, postal workers record information from the outside of letters and parcels before they are delivered. (Opening the mail would require a warrant.) The information is sent to the law enforcement agency that asked for it. Tens of thousands of pieces of mail each year undergo this scrutiny.

In other words, this kind of information gathering is similar to NSA programs collecting the metadata of phone and e-mail communications, since in none of these cases are law enforcement agencies actually allowed to look at content without a warrant.

The FBI was reportedly able to use this program in order to track down the person who sent the ricin letters to Bloomberg and Obama, as well as a number of other cases where they say mail covers were vital “to track drug smugglers and Medicare fraud.” However, the Times does note one potential case of abuse involving Arizona sheriff Joe Arpaio allegedly targeting a political critic.

You can read the Times‘ full report here.