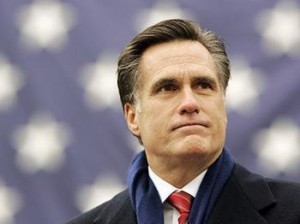 Jake Tapper‘s tweet of bizarre “no comment” boilerplate had all the makings of an Onion parody: “”…a spokeswoman for the Romney campaign, declined to comment on the candidate’s hairstyle, or to make Mr. Romney available to discuss it.”

It was no joke, but rather, a quote from The New York Times‘ straight-faced report on Republican presidential candidate Mitt Romney‘s fantastic hair.

The report is pegged to an interview with Romney hairstylist (for over two decades) Leon de Magistris, and reveals that the stylist has tried, in vain, to get Romney to go with a more mussed look, and that other customers in the area often request Romney’s conservative style using the Jennifer Aniston-esque shorthand “The Mitt.”

Those enamored of the multi-millionaire former Governor’s Subway-eatin’, coach-flyin’ frugality will also be delighted to learn that, in between $70 cuts by de Magistris, Romney often gives himself a trim on the road.

Look, it’s Thanksgiving weekend, not a lot is happening in the news, so a report about Mitt Romney’s hair isn’t the biggest crime against journalism in the world. What is troubling, though, is the fact that, as the report notes, stories about a candidate’s ‘do actually do matter to some voters:

Advisers describe Mr. Romney, whose hectic schedule has landed him in barbershops from Atlanta to New York City (where his cut costs $25), as uninterested in the finer points of his appearance. The same cannot be said of his advisers. In 2007, the last time Mr. Romney ran for president, they drafted a 77-page PowerPoint presentation on his strengths and weaknesses, which later fell into the hands of a reporter.

His hair was listed as a potential turnoff.

Privately, some Democratic strategists have seized on it as a physical manifestation of what they say is a deeper truth: Mr. Romney, whose fortune is pegged at around $200 million, is not like most Americans. (Democrats know the political power of hair: a $400 wash and trim undercut John Edwards’s populist message in 2007.)

Political coverage has an annoying habit of holding up a funhouse mirror to voters’ most superficial concerns (how’s the hair? what kind of beer buddy are we talking about?) and magnifying them, creating this chicken-or-egg loop. Do voters really care about candidates’ hair, or do they only care because stories like this tell them they care? The end result, either way, is that voters care about hair, or beer, or windsurfing, or brush-clearing.

Let me be the one, this time, to stipulate that yes, voters do care about a candidate’s hair, but also to add that they’re stupid for doing so. As it happens, the two most electable Republican candidates, Romney and Jon Huntsman, both have fantastic hair, but so do Rep. Michele Bachmann and Gov. Rick Perry. As previous leaders of the GOP presidential field, I’m sure they would both tell you that this kind of support is hair today, gone tomorrow. If you want to be the mane attraction in presidential politics, you need a lot more than a brush with greatness.