Greta Van Susteren: Don’t Invite Me To A Function If You Really Just Want Sarah Palin! 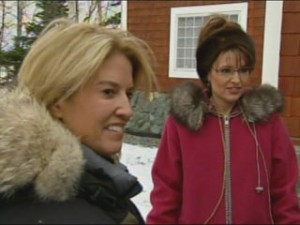 Fox News’ Greta Van Susteren has a bone to pick with The Media.™ The host, who has interviewed former Alaska Governor Sarah Palin numerous times – even taking a trip out to Alaska in 2010 to produce a three-part interview with Palin in addition to accompanying Palin on a humanitarian trip to Haiti – is sick and tired of groups inviting her to functions in a thinly veiled attempt to court Palin.

Luckily Van Susteren, like so many of us, can air out her grievances on her blog:

OK…I am not going to out the people/media groups a about whom I blog…but here is some more media silliness:

During both conversations in which I was told how much they would like to have me, I was told they had a good idea for my presentation. I said, what is that? The reply, “why don’t you get Governor Sarah Palin and interview her in front of the group?”

Hhm..so…they could not get Governor Sarah Palin themselves so they went to “plan B” — call Greta and get her to do it. I don’t think so.

Both organizations wanted to fill their auditorium with Palin as their calling card (and yes, making it all the sillier…the invitees and their membership have been routinely critical of Palin but now want to use her…go figure!)

First, and this will surprise many, I don’t have that relationship with Governor Palin. When I am able to talk to her, I book her on ON THE RECORD at 10pm. So they can stop calling me…..plus, I am just not that stupid.

Second, it is silly. The whole thing is silly.

(And PS – contrary to what everyone in the media thinks, my husband never worked for her and doesn’t. He is simply friends with her. )

And there you have it: Don’t get silly with Greta.