Helen Thomas: “You Cannot Criticize Israel In This Country,” Says Charge Of Anti-Semitism Is “Baloney” [Updated] 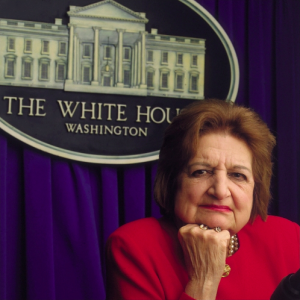 Legendary ex-White House correspondent Helen Thomas has largely been quiet since June, when the 90-year-old reporter abruptly retired after making waves with a statement disparaging Israel (in case you forgot, here’s what she said: “Tell ’em to get the hell out of Palestine…. They should go home… [to] Poland, Germany.”)

Today, though, Thomas told her side of the story in a 35-minute radio interview with Ohio station WMRN-AM. The interview was taped last week, and aired this morning. As the AP reports, she responded in one word when asked whether she’s anti-Semitic: “Baloney!” Though really, how else would she react? “Yes, I’m against Israel and the Jewish people?”

In any case, Thomas certainly doesn’t regret what she said in June; she told interviewer Scott Spears that her remarks represented “exactly what I thought,” and that she retired because she knew after making them her career would be over: “I hit the third rail. You cannot criticize Israel in this country and survive.”

Thomas got in another dig at the Jewish State later in the interview, when she said that she apologized for her remarks because she thought they had hurt people. But, as she went on, “At the same time, I had the same feelings about Israel’s aggression and brutality.”

The interview also covered other topics, such as Thomas’s thoughts on Christine O’Donnell (“Frightening”) and Sarah Palin (whose hypothetical presidency would be “a tragedy, a national tragedy”).

Though Thomas wants to be remembered for “my integrity and my honesty and my belief in good journalism,” chances are her reputation will always be tarnished—especially since she doesn’t appear very remorseful. In some ways, this is certainly a shame; a trailblazer like Thomas deserves to be celebrated. On the other hand, what the reporter said in June undeniably crossed the line. She shouldn’t be given a free pass just because she helped break through a glass ceiling.

And here’s video of the remarks that prompted Thomas to retire: