Here We Go Again: Huckabee On Presidential Bid: ‘Everything Is Still Open’ 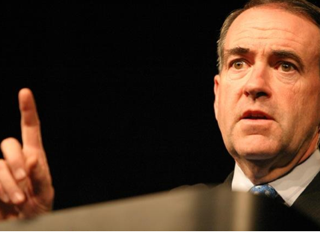 The more things change with the current Republican presidential field, the more things stay the same. Following the lead of former Republican hopeful (current independent maybe-hopeful) Donald Trump, Fox News host Mike Huckabee, has once again raised speculation that he still has a few embers in his belly that push him to consider a presidential run at a speaking engagement in Arkansas today.

According to the Arkansas News Bureau, Huckabee was speaking as a guest of the Clinton School of Public Service in Little Rock today, and while he did acknowledge that he didn’t seen himself in the 2012 race, partially due to the strength of incumbent President Barack Obama, he wasn’t ruling out a run in the future:

Appearing today as a guest of the Clinton School of Public Service, the surprise 2008 GOP presidential contender said he did not slam the door shut to running next year when he announced two weeks ago that he had decided against throwing his hat into the ring.

“Everything is still open. I haven’t closed doors. I found long ago that that’s not the smart thing to do,” Huckabee told reporters after a speech at the Clinton presidential library.

But Huckabee acknowledged several factors prompted him to bow out of the 2012 GOP race, not the least of which he said was the difficulty he sees in defeating Democratic President Barack Obama.

Huckabee is one of the first to outright acknowledge that President Obama’s strength is a reason for him to bow out. Other younger GOP contenders– Sarah Palin comes to mind– are also expected to weight his poll numbers significantly before taking the dive, since they can plausibly return to a completely open field in 2016. This also leaves Huckabee open to consider a vice presidential run if not one for the top spot, especially given the lack of Southern Republicans in the race so far.