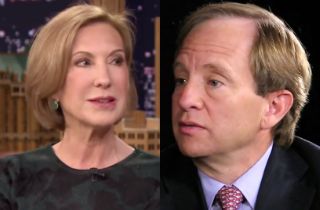 A column making the rounds on social media this weekend via the New York Times is titled “Carly Fiorina Really Was That Bad.” You can guess the content from there: Fiorina was the worst CEO since Jeffrey Skilling while the writer cherry-picks through different numbers and gauges to formulate the pre-decided, foregone conclusion.

Debate the details or Fiorina’s record to your heart’s content. Given this is Mediaite, this column is about trust and disclosure at/by the New York Times. So when the byline showed Steve Rattner to be the author, I scrolled to the bottom first before reading the body. And sure enough, here’s how the Times decided to characterize Mr. Rattner:

And that’s it. So to the average reader, one who doesn’t live in the political bubble, Rattner is just a benign, apolitical Wall Street executive and contributing op-ed writer who simply wanted to get the truth out about the hottest candidate in the GOP race right now (up 11 and 12 points in the latest CNN and NBC post-debate polls, respectively). Not mentioned by the Times is the fact Rattner was once President Obama‘s “Car Czar” back during the Cash-for-Clunkers days. He’s also a major fundraiser for (drumroll…) Hillary Clinton.

So should the paper of record have mentioned those little tidbits in addition to “Wall Street executive”? Yup. Did it? Of course not.

But here’s where the Times shows precisely why a solid majority of Americans don’t trust the media: in 2010, Rattner–the guy who apparently knows more about business and ethics than anyone… just ask him–paid $10 million in fines in 2010 to the SEC for his alleged involvement in a widespread New York State pension fund scheme. Per the SEC’s Associate Director, David Rosenfeld:

In other words, the Times still thinks it’s a fine idea to offer Rattner a byline to lecture us on what makes a CEO successful and what doesn’t. The same Rattner who has a clear conflict of interest in raising millions for Mrs. Clinton. What’s next, Grey Lady? Can we get an analysis on Fiorina’s performance from Bernie Madoff next weekend?

Will Fiorina’s tenure at Hewlett Packard be a campaign issue as her popularity continues to grow? Absolutely. It’s on her resumé and therefore fair game.

But if you’re The New York Times, I would think you could find someone other than Steve Rattner to make that argument, or at the least to allow the audience to decide for itself if his background makes him a qualified and objective observer.