How Did Taiwan’s NMA News Cover The Election? About As Hilariously As Expected 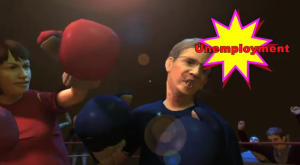 Well, you flipped through the channels and watched the clips and you know how all of the American networks covered the election, but what did news outlets outside of the US of A have to say about last night’s excitement? Most importantly, did NMA News, those delightful Taiwanese animators, give their take on the developments? Fortunately for people who get their news entirely from quirky cartoons on YouTube (You laugh, but that demographic clearly exists. I mean, someone voted for Alvin Greene), they were up late into the night (or whatever time it was over there) churning out the news.

Yep, NMA did not disappoint. They made individual videos for some of the more media-friendly match ups with each one more enjoyable than the last (Carl Paladino body-surfs, Harry Reid and Sharron Angle punch each other in the face with the issues). They also made more generalized videos, including their recap of the House and Senate results which features an elephant and donkey playing tug of war while creepy wind sound effects play in the background making the whole thing look like the weirdest post-apocalyptic future ever.

Until then, here are some of our favorites from NMA’s no-holds-barred election night coverage. Check out the rest here.