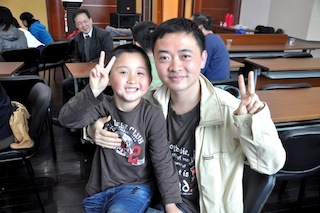 Ok, so, we can all agree that Mitt Romney releasing an iPhone app that prominently misspelled the word “America” is one of the funniest things ever. But, besides giving us tons of laughs, what else has the gaffe done? Has it helped anyone? Has it made our lives better in any way? Well, maybe not for any of us (asides, again, for the many, many, many laughs), but for a father and son in China, it’s helped them achieve their dreams.

For real. Mashable has the amazing story of John Chen, a man from Shanghai, and his son Blue Sky. The two of them love America. They love America so much that Chen’s dream is to one day send (the now four years old) Blue Sky to an American university. They love it so much that Blue Sky made a YouTube video of him singing Lee Greenwood’s “God Bless the U.S.A.,” a song some actual Americans can’t even stand. And Chen loves America so much that, in 2009, he bought Amercia.com for $100.

But that didn’t really matter, he writes Mashable: ‘For us, Amercia is so near to America, and it makes us feel so close to the USA and it also reminds us that we must work hard to get near to our soul land.’”

All Chen had on the site so far was an offer to sell the domain. And, yesterday, thanks to Romney’s boo boo, he started getting some potential buyers. And they’re willing to pay a few grand for it. And that money’s going to help Blue Sky get to America (spelled properly).

Of course, there is one clear question; When is Romney’s awful mistakes going to start helping American children? Answer us that, Mr. Romney.