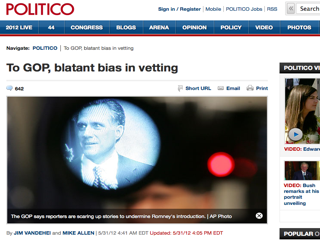 The New York Times and The Washington Post are not particularly happy about a post by Politico writers Jim Vandehei and Mike Allen posted this morning accusing the papers of enough bias to justify the right-wing outrage against them. The post, which extensively compares reports of Mitt Romney‘s and President Barack Obama‘s youthful indiscretions, argues that the Republican talking point that the media is biased against them has some credence to it, a claim that has both publications objecting vocally.

The report argued that there was something to the idea of a left-wing media bias in the two papers, stating, “no wonder Republicans are livid with the early coverage of the 2012 general election campaign. To them, reporters are scaring up stories to undermine the introduction of Mitt Romney to the general election audience – and once again downplaying ones that could hurt the president.” The post later argues, “Republicans cry “bias” so often it feels like a campaign theme. It is, largely because it fires up conservatives and diminishes the punch of legitimate investigative or narrative journalism. But it also is because it often rings true.”

The stories VandeHei and Allen used as an example of this bias are the comparison of David Maraniss‘s exclusive on the President’s marijuana past and stories about Romney’s family and friends having a predilection for horseback riding. The former, Politico notes, received page A6 treatment, while the latter was far more high-profile. Then there was the hair-cutting story:

And the horse-riding story came a few weeks after a second story that made Republicans see red – another front-pager, this time in the Washington Post, that hit Mitt Romney for bullying a kid who might have been gay, in high school nearly a half-century ago. The clear implication to readers: Romney was a mean, insensitive jerk.

VandeHei and Allen conclude the piece with reactions from the Post and the Times. Needless to say, neither paper is happy with their assessments. The Post argues that “the premise of this piece is nonsensical. It is the duty of the media to vet every aspect of the lives of presidential candidates — and it is one we take seriously, no matter the candidate.” The Times dismissed the report with slightly less sharp language, instead arguing that “the Times has exhaustively and aggressively covered nearly every aspect of Barack Obama’s story. To suggest that we’ve pulled our punches or tilted coverage in his favor or against his opponents just is not supported by the facts.”

The full comments from both papers are at Politico.