How President Obama Can Out-Gator Republicans On Debt Ceiling 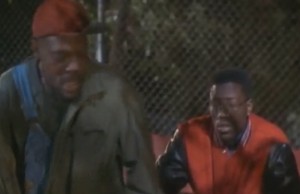 Even as the nation, and the markets, breathe a sigh of relief at President Obama’s avoidance of the so-called “fiscal cliff,” the political world is bracing itself for a series of other upcoming cliffs, most notably the debt ceiling, where Republicans feel they have significant leverage. The President, however, has repeatedly vowed not to allow the debt ceiling to be used in policy negotiations, yet has also ruled out using the unilateral “constitutional option,” leaving many to wonder just how President Obama intends to keep Republicans from holding the U.S. and global economies hostage to the threat of a government default.

The answer appears to be that he just doesn’t think they’ll do it, doesn’t think Republicans will take us to the brink of catastrophic default again, since the last time they did it was such a disaster. President Obama obviously hasn’t seen Jungle Fever.

In that Spike Lee joint, Wesley Snipes‘ main character, Flipper, is the responsible younger brother of a crackhead named Gator, memorably portrayed by Samuel L. Jackson. The relationship between Gator and Flipper is a lot like the one between Congressional Republicans (Gator) and President Obama (Flipper). In this clip, Gator (Republicans) tries to get Flipper (President Obama) to give him some money to buy crack (cuts to Medicare, Social Security, Medicaid, and other safety-net programs to finance more tax cuts), and when Flipper refuses, Gator threatens to commit violent crimes (refuse to raise the debt ceiling) against elderly people (the U.S. and global economies):

Set aside the irony that, in this metaphor, hurting old people is the crack. Why does the threat work on Flipper? Partly because Gator has obviously made good on it in the past, just as Republicans have, resulting in the first-ever U.S. credit downgrade. Just as Flipper tries to refuse Gator, President Obama is now firmly telling Republicans he won’t “play that game,” but the more Republicans dance around and chant, “You know I’ll do it,” the more President Obama will be reminded that they are, metaphorically, a crackhead, and aren’t as concerned with the consequences of their actions as normal people.

But that’s not the only reason it works. Gator doesn’t have to threaten Flipper to get some money, he could just skip that step, and go rob some old people. He threatens Flipper because he knows that Flipper believes he will rob old people, allowing Gator to get the money without incurring the risks involved in robbing old people. It’s not Gator’s recklessness and desperation that make it work, it’s Flipper’s conscience and sense of responsibility.

Similarly, Republicans know they can extract concessions from the President, because they have before, without actually causing a default. There’s nothing President Obama can do to make Republicans believe he would actually allow them to cause a default, or even get close enough to spook the ratings agencies and the markets. The President has assumed a measure of moral culpability for his crackhead congressional brother’s recklessness, and no one believes he will let them anywhere near a default. Unless something changes, this debt ceiling fight will end with Gator getting high, and Flipper yelling after him how he’s never going to do this again.

Unfortunately, President Obama can’t put Gator into rehab, because midterm voters in 2010 gave Gator the keys to the electoral map. The President has also ruled out the Ossie Davis option, whereby he unilaterally raises the debt ceiling under an interpretation of Section 4 of the 14th Amendment, which states that “The validity of the public debt of the United States, authorized by law, including debts incurred for payment of pensions and bounties for services in suppressing insurrection or rebellion, shall not be questioned.”

It’s an option that President Obama didn’t rule out during the last doomsday threat, but ultimately failed to exercise, saying at one point “I have talked to my lawyers. They do not — they are not persuaded that that is a winning argument,” and since then, the White House has said the option is “not available” to the President. Also unlikely is that the President will exercise the popular-among-wonks “Platinum Coin Option,” whereby the U.S. Treasury simply mints a pair of $1 trillion platinum coins, and deposits them into the treasury. It’s all legal, but not likely to happen. If it does, I vote to put Gator on the coin’s face.

But what if, instead of waiting for a desperate Gator to seek him out, Flipper went to Gator when he was holding, and snatched a big bag of crack away from him? Then, he could get Gator to approve a debt ceiling increase by threatening to flush Gator’s crack down the toilet. He could probably even get Gator to go for the Mitch McConnell plan, which would require a 2/3 majority to stop a debt limit increase.

As it happens, President Obama already possesses a decent quantity of Gator’s crack. He just needs to wave it over the nearest toilet. If there’s anything that gets Republicans higher than cutting safety net programs for the poor and the elderly, or cutting taxes for the rich, it’s defense spending, and in 60 days, those tasty rocks go right into the crapper when the “sequester” cuts kick in. In order to avoid the last debt ceiling hostage crisis, Congress voted for deep, across-the-board cuts to take effect if they could not reach a “grand bargain” on deficit reduction, including $500 billion in defense cuts.

It does no good to wave that crack bag when Gator is already mugging an old lady, but if President Obama whips it out now, that puts him in control. Gator knows he’ll do it, and he really wants that crack. The President should tell congressional Republicans that there will be no negotiations on the sequester cuts at all until they pass a clean debt limit increase, including the McConnell clause, then let them dance. They voted for the sequester cuts, so they can dance their way out of them.

Barring that, President Obama is just sitting on that playground, hoping that Gator will suddenly gain some sense of personal responsibility this time, and won’t really crash the world economy, but deep down, he knows they’ll do it, and so do we.