How to Watch the Capital One Orange Bowl: Michigan vs. Florida State Live Stream Online 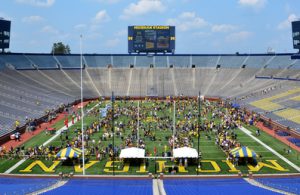 Okay, enough of the kiddie bowls. It’s time to get down to business. The New Year’s Six begins, at last, on Friday night. First up: the Capital One Orange Bowl between the No. 6 Michigan Wolverines and the No. 11 Florida State Seminoles.

This New Year’s Six appearance has to be considered a bitter disappointment for Michigan, which was just inches away from making the college football playoff. They got the short end of the critical fourth down spot in overtime against Ohio State in the regular season finale. The Buckeyes made it by a couple of chain links, scored a touchdown on the next play, and they got the playoff spot that many in Ann Arbor and beyond felt rightly belonged to the Wolverines.

Still, the Wolverines had a great year under all-world second year coach Jim Harbaugh. They went 10-2, and with a win on Friday night, they stand a very good chance of finishing in the top five. The challenge now, will be keeping Harbaugh in the fold. The LA Rams and the Chicago Bears may come calling. The former may offer a fortune, the latter is where the coach’s heart may lead him.

Florida State had a disappointing year in the ACC. A blowout loss to Louisville early in the season destroyed all their grand plans for 2016. Subsequent losses to North Carolina and Clemson finished them off. But the Seminoles did finish strong, winning four straight. And in an outcome no one could’ve imagined when they were 5-3, here they are in the Orange Bowl.

Kickoff for the game is 8:00 p.m. ET. Steve Levy, Brian Griese, and Todd McShay will call the action live on ESPN. The game will also be streamed online free with a cable subscription via WatchESPN. The Watch ESPN app can be downloaded from the iTunes, the Google Play store, and the Windows store.