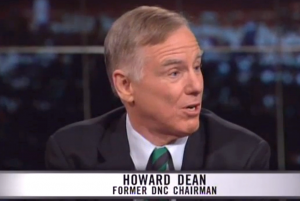 [American sniper Chris Kyle lines up a rifle shot] “Be not Thou far from me, O Lord.” [Lining up a second rifle shot] “Blessed be the Lord my strength, which teaches my hands to war, and my fingers to fight.” [Lining up a third rifle shot] “My goodness, and my fortress; my high tower, and my deliverer; my shield, and he in whom I trust.” [Lining up a fourth rifle shot] “O my God, I trust in thee: let me not be ashamed, let not my enemies triumph over me.” All four targets–lying motionless on the ground–appear to be dead.

It’s scenes like this (or not, you’ll see what I mean later) from the Clint Eastwood war biography blockbuster that continues to draw harsh reaction from some in Hollywood and at least one prominent member of political left. And once you thought all the criticism would have died down by now as the movie marches to a second dominant week at the box office (approaching $200 million gross), enter Howard Dean and Michael Moore…again:

Of course, the host merely shakes his head in agreement with the former Vermont governor and one-time frontrunner for the 2004 Democratic nomination. No surprise there, as the narrative fit Maher’s perspective on the film (who referred to Kyle, a Navy Seal, as a “psychopath patriot”). But is Dean correct in his assessment of the kind of audience going to see the film?

Not according to Deadline Hollywood, who reports that 43 percent of Sniper’s audience over its first four days (the most updated data available) were women. Additionally, 37 percent of those attending were under 25. Whoops.

With an A-list leading man in Bradley Cooper, as well as six Oscar nominations (including best picture and actor), awards-season enthusiasts and general moviegoers alike sought the film out, awarding it a rare A-plus grade in exit polls, according to CinemaScore.

Paul Dergarabedian, senior box office analyst for Rentrak, sums up Sniper’s audience thusly: “No matter on what side of the aisle your politics fall, you’ve got to admit this movie resonated with a broad audience,” adding “”This film is swimming in blockbuster waters and generating numbers generally reserved for super-heroes and summer movies.”

So despite Dr. Dean’s unchallenged assumptions and comically-broad brush, it appears more than just very angry conservatives are powering this film to historic box office and critical success. Millions of women are seeing it, millions more young adults are seeing it. In judging the film’s appeal, it would be wise to trust Dergarabedian–a highly-respected, veteran box office analyst–than Dean, who makes a living on TV throwing stuff up against a wall with the hopes it somehow sticks.

As for Moore, he again is screaming to be noticed with this triple-down tweet:

Tomorrow’s Sunday School (1) What Would Jesus Do? Oh, I know what he’d do — hide on top of a roof and shoot people in the back!

Moore evoked religion likely because Bradley Cooper’s character did the same in the scene above. Except that isn’t Cooper’s Kyle, but the underrated Barry Pepper’s portrayal of the fictional Private Daniel Jackson–a deadly sniper who prays before each kill–in another war movie nominated for Best Picture, 1998’s Saving Private Ryan. I applied the curveball to make this point: In researching reaction to that film at the time, Maher, nor Moore, nor Dean nor, well, anyone shared the kind of nasty, misinformed sentiment we’re hearing about Chris Kyle when it came to Pepper’s character. And it doesn’t matter that Pvt. Jackson was fictional…he was based on the hundreds of snipers who were an integral part of American units across Europe in World War II. And yes, director Steven Spielberg placed him in a positive light throughout Ryan until his demise, which nobody at the time felt even remotely compelled to criticize.

American Sniper is doing hot July numbers in the chill of January. Audiences of all stripes are flocking to see it, giving it a rare A+ rating along the way. But if you believed the likes of Dean, Moore and Maher, only a certain type of very angry male is going to see the gripping story of this psychopath patriot.

Brandon Griggs and Todd Leopold sum up the movie best in their CNN.com Friday column that explores all sides of the controversy:

“If there’s a message in ‘American Sniper,’ it may be that Americans could do a better job of understanding what our veterans go through, and of taking care of them when they return.”

Watch Howard Dean’s remarks on Real Time below, via HBO: