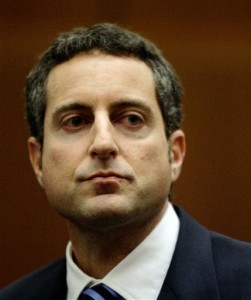 The Anna Nicole Smith tragedy has already made Howard K. Stern a convicted felon, but, if he has his way, it will also make him a really, really rich… convicted felon. After being found guilty of conspiring to use fake names and false pretenses to score prescriptions, Stern continues his plight to assume control of Smith’s estate, a case now on the Supreme Court docket.

The felonious lawyer and former Anna Nicole Smith paramour will be arguing for control of the long-disputed estate for the second time. We can only hope that the nine justices are as tired of Stern v. Marshall as everybody else is, and that the case won’t linger in the Court (or in headlines) for too much longer.

Joe diGenvoa is a legal expert and founding partner of the Washington, D.C., law firm of diGenova & Toensing said “From a legal standpoint, those who facilitate drug addiction are just as guilty as those who prescribe and administer the drugs. As a lawyer, Howard K. Stern knew better than to illegally obtain an unending stream of lethal drugs for Anna Nicole under false names.” DiGenova continued, “now facing jail time for his role, the court has an opportunity to make an example of Stern and send a message that this behavior will not be tolerated under any circumstance.”

His partner Victoria Toensing continued, “Although the possibility of jail time is certainly weighing on his mind, Stern must also turn his attention to the Supreme Court. Stern engaged in ‘forum shopping’ by using a bankruptcy claim as a vehicle to receive a favorable decision over a probate matter. He then manipulated the legal system in an effort get his hands on the Marshall estate.

“The extensively over-litigated case – Stern v. Marshall – spent the last 15 years traveling through the appellate process all the way up to the Supreme Court which remanded the case to the 9th Circuit, which unanimously held that Marshall was correct. Now Stern is once again asking the Supreme Court to intervene. It is time for this case to end and give all those involved well-deserved peace of mind.”