Howard Stern On Sarah Palin: “You Want To Vomit From Her” (And That’s The Nicest Part) 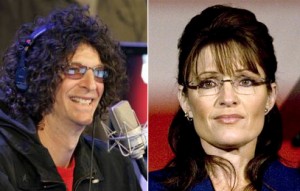 Yesterday, Howard Stern had some harsh words for Sarah Palin about the tone of her video speech from Wednesday morning. Like many of Palin’s detractors, Stern felt that the former Governor focussed too much on herself and not enough on the actual victims. However, unlike most of the other criticisms of the video we’ve heard, Stern’s aforementioned words weren’t just harsh; a couple of them were those that one doesn’t use in polite company.

A quote from a more SFW section went as follows:

“We know you didn’t tell the shooter to go out and shoot people but it isn’t great that you have people in the crosshairs. It’s a bad image. I wouldn’t do that to my worst enemy. It’s like telling people, ‘Gee, I think someone ought to take this person out.’ And then, when she’s laying there in the hospital and you’re making this speech to defend yourself, it just all comes off horribly wrong. It’s like don’t talk about yourself right now. This isn’t about you. This is about a woman, who is a Congresswoman, who’s been shot in the head. A lot of people got taken out that day.”

He also brought up Palin’s longstanding feud with David Letterman, pointing out that, were Letterman to have thrown up a gun sight over an image of her daughter online, chances are she wouldn’t have taken it very lightly.

However, it wasn’t all about dissing Sarah Palin. Robin Quivers was right there to defend her…kind of. She said she didn’t “appreciate [him] taking such a hard line” with Palin because it would be like him “beating up on Gary the Retard.”

See? Not everyone hates Sarah Palin.

Warning – the following audio is NSFW, containing a number of offensive terms.