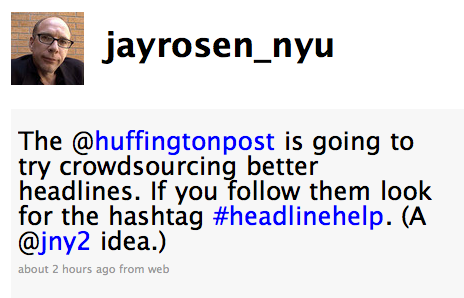 The Huffington Post, which currently profits off of the blood, sweat, and tears of its many hapless unpaid contributors (j/k), has hit upon a new way to involve its readers in the creative process: crowdsourcing headlines through Twitter.

According to NYU journalism professor Jay Rosen — who tweeted about it before The Huffington Post itself — the idea is based on notions discussed in this blog post by Josh Young of Networked News, who mentioned the even further-reaching idea of an entirely Twitter-aggregated ‘publication’ which he called “The Hourly Press.” (bold=correction)

Update: Oops; Young was explicating The Hourly Press; it wasn’t his original idea. Very cogent explanation, though. #proofreadinghelp, anyone?

The Huffington Post hasn’t yet used the feature, and the #headlinehelp channel is currently filled with retweets of theirs or Rosen’s tweet. Well, almost full of retweets — one tea party-loving heckler did not appear to be much interested in #headline #helping:

Hashtags aren’t perfect aggregators. Earlier this summer, Starbucks’ Twitter contest was hijacked by anti-Starbucks activists, who used the coffee company’s #starbucks and #top3percent hashtags to spread their critical message to some of Starbucks’ biggest fans — and ruin the contest in the process. Given the anti-HuffPo enclaves out in Internetland, the site runs the risk that #headlinehelp will get spammed or polluted.

The real genius of The Hourly Press is that the ‘winner’ isn’t based on raw number of clicks, but on the work of people who are already being followed by site editors; this gets around the problem of the polluted channel. “Note well, though, that those self-selected folks click before they read the thing to which the link points. They make some judgment based on the tweet’s snippet of text accompanying the links, but they may have been terribly, horribly disappointed by the results. Of course, this presumably doesn’t happen too too much since folks would just unfollow Dave in the longer term.” Young’s plan is trickier to execute than just scanning a raw feed, though, and it remains to be seen whether The Huffington Post will get it right — and what tricks their ill-wishers will use to try to subvert it.

Still, it’s a really neat idea that will lead to some creative stuff, and we hope it works out for them.