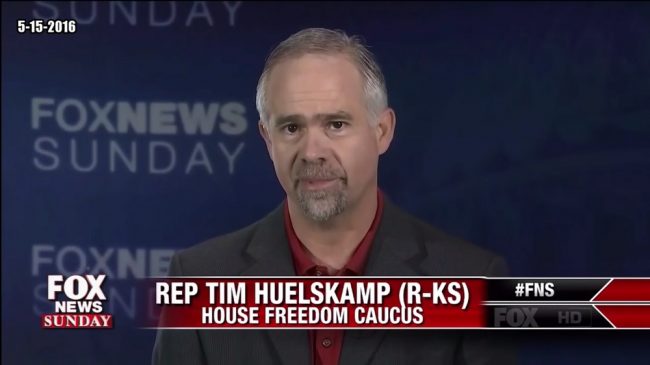 Matt Fuller, a congressional correspondent for Huffington Post, offered a lesson on what might happen when you text and drive. It didn’t involve an accident, but it inadvertently concluded with a one-liner from a former congressman.

On Friday, Fuller sent a crude birthday text message while driving to someone he thought was his cousin. However, to his horror, it was actually former Republican Congressman Tim Huelskamp. The Huffington Post journalist revealed his message in a Twitter post:

You haven’t lived until you’ve tried texting your cousin a crude bday message while driving and accidentally texted a former Congressman. pic.twitter.com/jKHQc25EOi

@MadiLAlexander Don’t text and drive — or you might end up texting something crude to a former Congressman who definitely doesn’t appreciate crude language.

A half hour later, Fuller disclosed that Huelskamp had replied to him, but initially stated that it was “off-the-record.” However, the former Kansas politician granted the correspondent permission to reveal his humorous reply, and he posted a screengrab later that hour.

Update: I won’t text and drive anymore, and Huelskamp’s response was perfect (and off-the-record).

Alright. Huelskamp has given me permission to post his response.

(I don’t actually have a cousin named Tim. Not sure how this happened.) pic.twitter.com/IBMvuyBvnq

@MEPFuller This wasn’t actually a mistake, was it, Matt

@MEPFuller Dying. This is awesome.

@MEPFuller As a former huelskamp staffer of 6 years… classic response from him. Made my day.

Fuller offered a postscript on his accidental text message twelve minutes after he revealed Huelskamp’s response.

Periodic reminder that a lot of the Congressmen you people despise are really great on a personal level.

The former representative also responded indirectly to the exchange by correcting a local TV station’s reporting on it.

@wibw Boehner was not my boss – and that’s why I was happy to lead the charge to fire him as speaker.

@Nick_Viviani My point is this: our representatives don’t work Boehner or anyone in DC. They work for us. That’s why the establishment went after me.