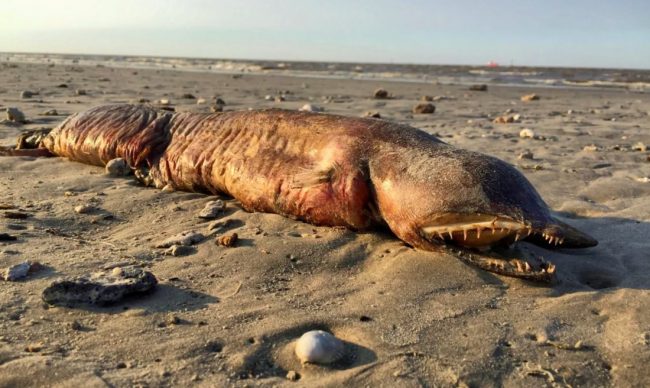 Amid the devastation wrought by Hurricane Harvey in Texas, one anonymous internet person went viral after she snapped a terrifying photo of a large, fanged monster chilling out on a beach in Texas City.

“Okay, biology twitter, what the heck is this?? Found on a beach in Texas City, TX. #wildlifeid,” tweeted Preeti Desai on September 6.

Okay, biology twitter, what the heck is this?? Found on a beach in Texas City, TX. #wildlifeid pic.twitter.com/9IUuuL65qh

The Internet promptly exploded as the images shot around Twitter. Many theories were offered, but the overwhelming sentiment remained, ‘oh my God, what is this horrific creature,’

That is definitely #Babadook! pic.twitter.com/x8l4NFnfGm

Well, it turns out there was a completely normal explanation — which suggests there is much about the mysteries of the deep that we still may not (and may not wish) to understand.

Dr. Kenneth Tighe, a biologist Smithsonian National Museum of Natural History identified the creature, the BBC reported. According to the Guardian, the eel’s proper name is Aplatophis chauliodus — which roughly means “Terrible Serpent.”

The story bears more than a passing resemblance to the famous Montauk Monster, which washed ashore under mysterious circumstances in New York in 2008. Though it was ultimately declared a raccoon, it sure didn’t look like one, and speculation about its true identity has persisted.