‘I Don’t Know What to Believe’: Jeb Reacts to Trump Echoing Him on Immigration 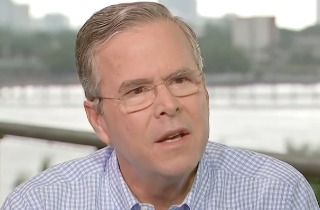 During a Thursday radio interview, Jeb Bush tore into Donald Trump and said he doesn’t believe for a second that the plutocrat’s actually toning down his ideas on immigration.

For the past several days, Trump has been flirting with the possibility that he might flip-flop on his idea for a deportation force that would expel millions of illegal immigrants from the country. Critics took note of Trump’s recent statements, and many have pointed out that his new approach seems strangely resemblant of the one he attacked Bush for having only a few months ago.

When Bush was asked about this in a WABC interview with Rita Cosby, he tore into Trump for pandering his political platform to whatever his audience wants to hear.

“I can’t comment on his views, because his views are… they seem to be ever, ever-changing, depending on what crowd he’s in front of,” Bush said. “All the things that Donald Trump railed against, he seems to be morphing into, it’s kind of disturbing.”

Bush went on to burn Trump for treating politics like a “game” and for becoming exactly the kind of politician Trump built his campaign on by speaking against:

“I don’t know what to believe about a guy who doesn’t believe in things. His views will change based on the feedback he gets from a crowd or what he thinks he has to do. Life is too complex.”

Trump, for his part, told Anderson Cooper last night that he knows nothing about Bush’s immigration platform, and he expressed disinterest in it because Bush never proposed a border wall.