I Have a Revisionist Dream: National Review Tries to Make Dr. King’s Speech an Ode to Conservatism 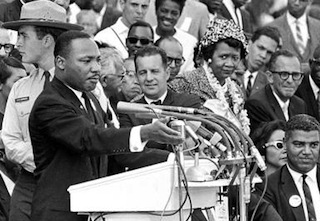 The upstanding folks at the National Review are shoveling overtime on this August 28 to get themselves out of the hole their founder William F. Buckley first dug more than fifty years ago.

“Too many conservatives and libertarians, including the editors of this magazine, missed all of this at the time,” the editors wrote of the March on Washington, in an editorial I doubt a single one of them looked forward to. “They worried about the effects of the civil-rights movement on federalism and limited government. Those principles weren’t wrong, exactly; they were tragically misapplied, given the moral and historical context.”

Tragically misapplied limited government principles is quite the deflation of the systemic and institutionalized racism that reigned from the end of the Civil War until it was partially mitigated by hard-earned legislation in the 1960s — as if conservatives were all set to join the March on Washington but tripped over a hardcover of Hayek and missed their church bus. The National Review knows full well it was on the wrong side of history fifty years ago. But by retroactively reading their conservative ideals into the civil rights movement — by reframing the “moral context” — the editors hope to smuggle the magazine’s current, less rabid, but no less sincere brand of racism back into the debate.

Editor at large Jonah Goldberg does most of the heavy lifting in a separate post. “In the American context, these are universal appeals,” Goldberg wrote of King’s “idea of colorblindness.” “King pleaded for the fulfillment of America’s classically liberal revolution. At the core of that revolution was the concept of negative liberty—being free from government-imposed oppression. That is why the Bill of Rights is framed in the negative or designed to restrict the power of government. ‘The Congress shall make no law’ that abridges freedom of speech, assembly, etc. This arrangement has never fully satisfied the Left.”

Goldberg’s attempt to disaggregate King’s call for racial equality (which, note, is different from Goldberg’s “colorblindness” gloss) from the concurrent demands for economic and social justice is a crucial maneuver in NR’s escape hatch. Goldberg argues that because America responded to King’s appeal for racial harmony — as evidenced by the fact that we honor King with street signs but not, say, labor organizer A. Philip Randolph — that we rejected the liberal elements of the march while extracting the “negative right” that no person should be discriminated against by the law, an essentially conservative result.

This sleight of logic both situates an illusion of conservatism within the civil rights movement and leaves contemporary conservatives free to pursue any modern form of racist garbage they’d like. See, for instance, Bill O’Reilly on what MLK would make of contemporary black society, or George Will on any Sunday you’d like, each of whom in their own way attempt to read African Americans’ economic conditions not as an obstacle to self-realization but a punishment for lack of personal responsibility, something with which the socialist-heavy civil rights movement probably would not have agreed. By erasing integral portions of his message, conservatives have withered Dr. King into a right wing scold.

This elides the significant fact that the civil rights movement largely succeeded by enshrining its goals of ending state-sponsored discrimination into law. Goldberg would have a difficult time selling the argument that the country at large would have been so accepting of the process of integration were it not for the Civil Rights Act of 1964 and Voting Rights Act of 1965—which were so universally appealing Lyndon Johnson admitted they would cost the Democrats the south. Once minorities had “negative rights” of their very own, public opinion gradually and incompletely reformed along the new templates of the law. This was not an instance of a populace elevating one aspect of the movement over another, but a country ratifying that movement’s hard-fought legal battles, at times reluctantly. And, it should be said, given numerous states’ very current attempts to restrict African American voting, not all the country is on board with it yet.

Which brings us to the National Review’s pressing need to rewrite history. If the magazine seems to be pretzeling itself over its own civil rights legacy, that’s because it’s trying to somehow square the fact that it was wrong about racial progress fifty years ago with the desire not to be wrong about it now. Ignore the fact that the publication has had to fire two writers in the past two years for racist rhetoric. (Or don’t!) Consider instead the publication’s stance on Voter ID laws, which are ruses to restrict minority voting—ruses which threaten to undo the very legislation the civil rights movement worked so hard to achieve.

So much for negative rights, and so much for the National Review’s argument that the March on Washington sounded conservative ideals in its thousands of footsteps, or that they hear such echoes now. This is a magazine claiming to have learned lessons when it has only learned to appropriate rhetoric, scribbling op-eds against the racism of the past with one hand while endorsing the racism of the present with the other. The editors of the National Review wrote their appreciation of Martin Luther King, Jr. this morning with their fingers crossed behind their back. Don’t believe them.