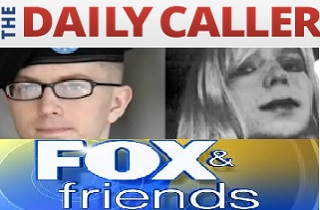 As we reported Tuesday, Fox & Friends displayed sick ignorance by playing the Aerosmith song Dude Looks Like a Lady during a tease for a story on Chelsea Manning, the transgender woman formerly known as Pfc. Bradley Manning. The shocking display of transphobia was roundly condemned by several websites, which prompted The Daily Caller to amp up the hatefulness with an even more ignorant rundown of the coverage, including a definition of gender transition that makes Fox & Friends seem like GLAAD in comparison.

In case you missed it, here’s the F&F segment in question:

To clarify, transgender women are not “dudes” who “look like ladies,” they are women whose gender identification differs from the sex they were assigned at birth. Calling Chelsea Manning a dude who looks like a lady is a little bit like saying that Fox News looks like a news network, if that helps. The difference is that fighting for their own gender identities every day, against the type of ignorance perpetuated by people like F&F, can be deadly. In addition to the risk of violence from others, trans people face other deadly-serious challenges:

Despite the seriousness of the problem, The Daily Caller identifies the “outrage-mongers” as the real problem:

Shocking! Just because Bradley Manning, who is a dude, has expressed a desire to look like a lady, that doesn’t mean they should play Aerosmith’s “Dude Looks Like a Lady.” It’s entirely inappropriate!

Bradley Manning was a dude. Chelsea Manning is a woman. This is not complicated. The DC includes this helpful note:

This is so ignorant, it doesn’t even qualify for non-transgender women, many of whom don’t wear makeup, long hair, or even necessarily “women’s clothing.” If they were a news outlet, The Daily Caller might check with GLAAD’s media guide to find out what these things really mean:

Transition Altering one’s birth sex is not a one-step process; it is a complex process that occurs over a long period of time. Transition includes some or all of the follow­ing personal, legal and medical adjustments: telling one’s family, friends and/or co-workers; changing one’s name and/or sex on legal documents; hormone therapy; and possibly (though not always) one or more forms of surgery.

Transphobia is not limited to conservatives or conservative media, and it is a particularly dangerous form of bigotry, because transpeople have traditionally been the most visible objects of LGBT-based violence, beginning with the Stonewall uprising. The DC and F&F might think they’re just having some sophomoric chuckles, but they’re spreading their bigotry to large audiences whom transpeople will encounter in the real world. When they do, how will those bigots answer this question, posed by The DC?

What exactly has Bradley Manning done to earn our respect and place himself above mockery?

Chelsea Manning has done the only thing that is required to earn the respect that is being denied here: she is a human being.