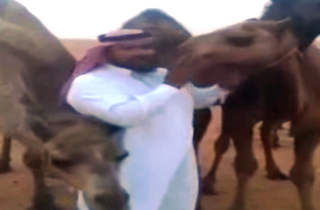 Kissing camels? Cute. Kissing camels in direct violation of a government edict to keep away from the animals because they spread a deadly illness that could cause a global pandemic? Pretty dumb.

Kissing camels in direct violation of a government edict to keep away from the animals because they spread a deadly illness that could cause a global pandemic, and then bragging about it on social media and YouTube? Go to hell.

Such is the case in Saudi Arabia, which is in the midst of a MERS outbreak that’s infected over 510 people and claimed 157 lives as of yesterday.

MERS is scary. MERS is a coronavirus that causes severe respiratory illness and kills 30% of the people it infects. It’s likely to grow even scarier come Ramadan, which starts in July and will involve millions of people traveling throughout the Arabian peninsula for the hajj. There is no vaccine, and by the estimates of most researchers, it’s much deadlier than SARS (though less infectious).

Public health officials have traced the origin of the MERS virus to camels, and warned its citizens to avoid sick camels, handling raw camel meat and camel milk, and being unprotected when generally working with dromedaries. You think this would be taken seriously, considering that death by MERS is basically death by the worst flu ever.

But no. Camels are the adorable puppies of Saudi Arabia, and people are too obsessed with them to avoid dying of a terrifying respiratory illness. From the BBC:

In one video, a man stands between a pair of camels and asks it to sneeze. “Look at me! Sneeze, sneeze! They say there’s Corona in this,” the man says, while hugging and kissing his two camels. Then he shakes one of the camels’ heads and says, “She says no. Is there Corona in you? She says no.”

Meanwhile, a Twitter user with the handle @fheed6666 – who has more than 90,000 followers – tweets to acting Saudi Health Minister Adel M Fakeih: “@adelmfakeih #the_campaign_against_camels_exposed And we call for it to stop or for evidence to be produced because camels are fine and all the ill people are in cities.” An info-graphic circulating on Twitter suggests camels are more valuable than petrol.

Technically, @fheed666 may be onto something: most of the MERS patients haven’t come in contact with camels or camel products, and one expert tells the Economist that the likelier culprit is the Egyptian tomb bat, which can also play host to the disease. But still: stay the hell away from camels, people, and for fuck’s sake, don’t brag about it on the internet.

In fact, just don’t brag about doing dumb stuff on the internet.