If GOP Approaches New Voting Rights Act Like They Did Immigration Reform, The Party Is Doomed

If GOP Approaches New Voting Rights Act Like They Did Immigration Reform, The Party Is Doomed 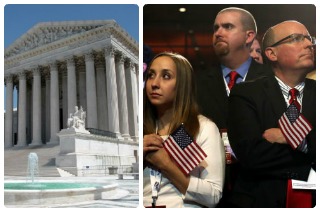 The clock is ticking for the Republican Party. The ramifications surrounding the Supreme Court’s decision to strike down portions of the Voting Rights Act will take time to materialize, but some immediate effects can be anticipated. The most immediate will be the reengagement of broad swaths of the minority electorate in the political process. Those reenergized minority voters will threaten the GOP’s electoral prospects ahead of the 2014 midterms; prospects which are themselves entirely dependent on a low turnout in the first place. The longer term impacts of the Court’s VRA decision are more mixed and present opportunities for both parties. The Republican Party has a choice to make: given the way in which the congress GOP has approached the debate surrounding immigration reform, it seems as though Republicans in Congress will take a proactive and inclusive approach to reforming the VRA. If they fail to make an intellectually-consistent and apolitical case for the reform of the Voting Rights Act, the damage done to the GOP’s image among minority voters may be irreparable.

The Supreme Court’s decision represents a great opportunity for the GOP to adapt and appeal to minority groups. The VRA’s preclearance provisions are distinctly anti-federalist. The enforcement, or lack of enforcement, of the preclearance provisions enshrined in the VRA’s Sections 4 and 5 were selectively enforced by the Department of Justice – itself, an increasingly suspect institution. An unintended consequence of the VRA was the Balkanization of the American electorate — shrinking the opportunities for voters to have a substantial impact on the political process and reducing the act of voting in many districts to a perfunctory exercise.

To be blunt, the VRA has evolved from a necessary check on a variety of suspect regions of the country to an arbitrarily enforced, anachronistic, exclusionary law which legally ratifies racial segregation. By 2013, the law performed virtually the opposite function it was designed for 1965.

But the VRA is not going away. Though gutted by the Court, the law remains an important bulwark against the enactment of racially discriminatory changes to local election laws. Republicans would be well-served to get out in front of the issue of VRA reform with solution-oriented proposals aimed at creating a more modern, effective, and politically neutral enforcement of the VRA’s preclearance provisions. Don’t hold your breath.

Observe, for example, how the GOP has approached the immigration reform debate. For too many Republican politicians, the critical issues facing the nation’s 11 million undocumented immigrants were secondary to the party’s electoral prospects with Hispanics. Facing what Sen. Lindsey Graham (R-SC) called a “demographic death spiral,” the party only embarked on a serious effort to appeal to Hispanics by addressing their concerns as a distinct bloc of the electorate after losing the Hispanic vote by 44 points in 2012.

Writing in Mediaite, A.J. Delgado performed a careful dissection of the exit polls over the last several decades of presidential electoral history and found that reforming the immigration system in 1986 had a negligible impact on the GOP’s share of the Hispanic vote. The GOP enjoyed the most fortune with Latino voters only when the party’s national candidate could rely on their personal appeal with that group of voters.

If the Republican Party’s appeal to Hispanics largely informed how the party approached immigration reform, it is reasonable to expect a broad faction of the party to write off reform of the VRA due to the Republican Party’s virtually nonexistent support among African-Americans (Mitt Romney received 6 percent of the black vote in 2012). This would be a near fatal mistake.

Earlier this month, I wrote that this decision, widely expected to be a tough one for supporters of the VRA, has a bright side for Democrats. In the short term, the Court’s decision will likely invigorate a disengaged liberal electorate and could potentially result in a partisan midterm turnout that more closely resembles 2012 than 2010.

Democrats can and probably will, as a result of the measurably increased engagement of their base voters, campaign on the VRA’s evisceration and consolidate their hold on the minority electorate. While this strategy would halt the party’s efforts to engineer a Southern resurgence, it would cement voters’ impression of the Democratic Party as the protectors of the interests of American minorities.

But Republicans could embrace the opportunities presented by the Supreme Court’s decision as well. The GOP could argue for a broader map, not a narrower one, with an emphasis on cities and municipalities. They could make the case that the DOJ’s Civil Rights Division has politicized the process of seeking and receiving “bailouts.” In short, the GOP could make a case directly to black voters with an analytical and thoughtful appeal explaining why the VRA was so deeply flawed and how to fix it.

Yes, the Republican Party’s arguments may be rejected by African-American voters, but at least they will have offered good faith, well-reasoned proposals for reform. That approach may not yield dividends with this generation of minority voters, but it may with the next. Given the party’s refusal to play the long game, it is doubtful that the GOP will pursue such a course. If they do not, the lingering damage to the party’s electoral viability will be catastrophic.