If Trump Wants To Know Why Apprentice Is Failing, He Can Look in a Mirror 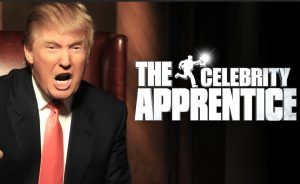 Earlier today, Donald Trump got all in his feelings about how bad he thinks The Apprentice is doing now that Arnold Schwarzenegger has taken the helm. He called himself a “ratings machine,” which is certainly in line with what was discussed this morning regarding the Trump presidency being an extended television show.

Schwarzenegger responded gracefully, but that’s not the point. The point is that Trump went after the ratings of a show for which he is still the executive producer and acted like ratings didn’t fall considerably during every season he hosted (which they definitely did). The other point is that it did reasonably well when he was on it because it got support from a viewership that was more in line with the old Trump ideals. Remember when Trump rubbed elbows with the rich and famous, tried to get invited to Chelsea Clinton‘s wedding, and cosponsored $500-a-ticket fundraisers for abortion rights organizations? See, before he was insisting he cares about miners, factory workers, and the “unborn,” he was just another coastal liberal.

SurveyMonkey can prove it. Look what they found when asking Trump voters if they would describe themselves as regular viewers of the program:

But the biggest surprise of all may be that Hillary Clinton wins voters who say they are or have been regular viewers of the Apprentice—and by a 23-point landslide (59 to 36%). Trump does best but still trails (47 to 44%) among voters who have watched the show only occasionally.

Odd? The demographics and partisanship of The Apprentice’s audience can explain a lot of it. Trump does worse among regular viewers because they are more likely to identify or lean Democratic (53%) than occasional viewers (44%) and those who have never seen the show (46%). The audience of regular Apprentice viewers is also far more African American (20%) than the audience of occasional viewers (12%) and the population of non-viewers (10%).

Democrats and businesspeople tuned into the show because it featured celebrities they liked and a setting that made sense to them. The type of people Trump would later court in order to win the presidency didn’t care much about a show set in a New York City high-rise. They prefer Duck Dynasty, perhaps Pawn Stars. It’s no big shock that people prefer to watch programs that they can see themselves in. As they say in progressive circles, representation matters.

It’s also no big shock, then, that no left-leaning entertainers want to be a part of that representation anymore now that the show is associated with a far-right demagogue. Finding big names to headline the program is about as hard as finding some to headline the inauguration.

The show has lost the left-leaning viewership that made it popular and has failed to attract the interest of Trump’s core voters.

The idea that all along, Trump — or even Schwarzenegger — had the power to determine who was fired is flawed. The viewers decide. Ratings are down because Trump is not a popular man and his brand is not a popular brand. He’s the one who has been fired.