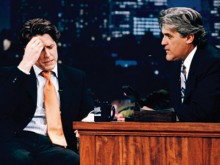 David Letterman’s public apology Monday night for bad behavior is merely the latest in a long list of famous public apologies, mostly for similar bad behavior (Letterman has the rare privilege of adding extortion victim to the list), though a couple of times it’s been the result of someone shooting their mouth off. Letterman joins a list that includes a whole lot of politicians — Bill Clinton, Jim McGreevey, Mark Sanford, Eliot Spitzer — and one or two jackass entertainers.

Strangely, it was hard to come up with women for this list! Paris Hilton was a last-minute addition — if you can think of any let us know and we will happily add: women screw up too. Also interesting to note is how many of these apologies occur on late night television; Letterman also joins an esteemed list there, too, though up until last night he was on the other side of the couch. With that in mind, we bring you our Top Ten Public Apologies — from nappy-headed hos to “I did not have sexual relations with that woman!” to Hugh Grant, the standard bearer of late night apologies, relive all your famous oh-no-they-didn’t breaking news moments. No doubt there will be more.